COLUMBIA, Mo. – Fish, unlike humans, can regenerate nerve connections and recover normal mobility following an injury to their spinal cord. Now, University of Missouri researchers have discovered how the sea lamprey, an eel-like fish, regrows the neurons that comprise the long nerve “highways” that link the brain to the spinal cord. Findings may guide future efforts to promote recovery in humans who have suffered spinal cord injuries.

“There is a lot of attention to why, following a spinal cord injury, neurons regenerate in lower vertebrates, such as the sea lamprey, and why they don’t in higher vertebrates, such as humans,” said Andrew McClellan, professor of biological sciences in the College of Arts and Science and director of the UM Spinal Cord Injury Research Program (SCIRP).

The study focuses on the regrowth of a particular group of nerve cells called reticulospinal neurons, which are necessary for locomotion. These neurons are found in the hindbrain, or the brainstem, and send signals to the spinal cord of all vertebrates to control movements of the body, such as locomotor behavior. When these nerve cells are damaged by a spinal cord injury, the animal is unable to move below the level of injury. While humans and other higher vertebrates would be permanently paralyzed, the sea lamprey and other lower vertebrates have the ability to regrow these neurons and recover the ability to move within a few short weeks. 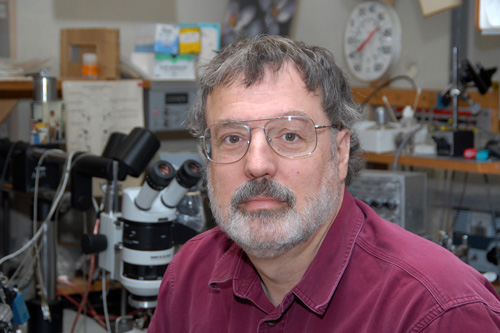 Andrew McClellan. McClellan discovered how the sea lamprey, an eel-like fish, regrows the neurons that comprise the long nerve “highways” that link the brain to the spinal cord. Image credit: University of Missouri

In the study, McClellan and his colleagues isolated and removed injured reticulospinal neurons from sea lamprey and grew them in cultures. They applied chemicals that activated a group of molecules, called second messengers, to see what effects they had on these neurons’ growth. They discovered that activation of cyclic AMP, a molecule that relays chemical signals inside cells, acted somewhat like an “on” switch—essentially converting neurons from a non-growing state to a growing one. However, it had no effect on neurons that had already begun to grow.

McClellan says that the information learned from the study may shed light on studies of neural regeneration in mammals, including humans.

“In mammals, cyclic AMP does appear to enhance neural regeneration within the central nervous system in an environment that normally inhibits regeneration,” McClellan said. “Cyclic AMP seems to be able to overcome some of these inhibitory factors and promotes at least some regeneration. Hopefully our studies with the lamprey can provide a list of conditions that are important for neural regeneration to help guide therapies in higher vertebrates, and possibly in humans.” 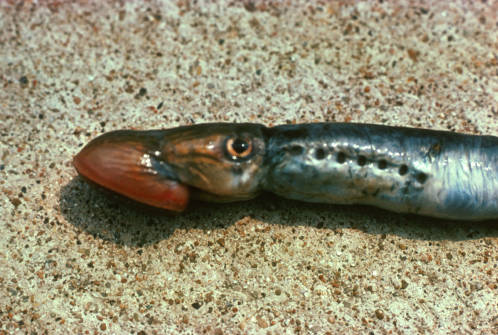 The sea lamprey, an eel-like fish, regrows the neurons that comprise the long nerve “highways” that link the brain to the spinal cord. Image credit: University of Missouri

Contributors to the study “Cyclic AMP stimulates neurite outgrowth of lamprey reticulospinal neurons without substantially altering their biophysical properties,” include Timothy Pale and Emily Frisch, MU Division of Biological Sciences. The study was funded by the National Institutes of Health, the University of Missouri (UM) Spinal Cord Injury Research Program, UM Research Board and MU Research Council, and appeared in the journal Neuroscience.