This new application will be unveiled at the National Plant Diagnostic Network’s conference Nov. 7 at Berkeley, Calif.

The traditional approach to identifying plant pathogens involves collecting field samples, sending them to a laboratory and awaiting the results. During the NPDN presentation, Hashsham will demonstrate the instrument’s effectiveness in correctly identifying diseases, which will speed treatments and help keep the pathogen from spreading.

To use the Gene-Z device, researchers take a swab for pathogens and transfer the sample to a microfluidic chip, which is inserted into the device. Used with an iPod Touch or Android-based tablet, Gene-Z can identify the pathogen, its genotype and its amount in 10 to 30 minutes. MSU researchers demonstrated its effectiveness by using it to detect a new disease devastating cucumber crops in the United States. 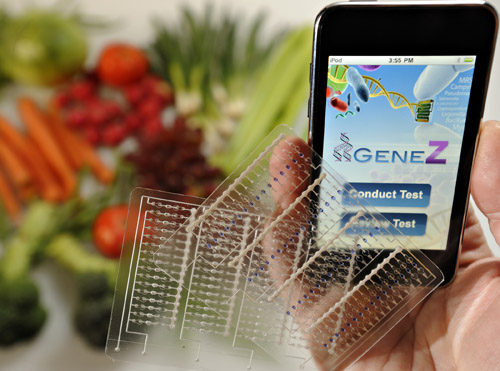 “We’ve already successfully proven Gene-Z’s capacity for quantifying cancer markers,” Hashsham said. “With this application, we can speed the analysis of pathogens in plants, water and food with the ultimate goal of improving the safety and security of food supplies anywhere in the world.”

Gene-Z is ready to be manufactured, and Hashsham is working with MSU Technologies to bring the product to market.

“This is exactly the kind of new information that we like to share with our members during our conferences,” said Ray Hammerschmidt, chairperson of MSU’s plant pathology department and NPDN regional director. “Our goal is to stay ahead of the multitude of plant pathogens and pests that threaten the world’s food supply. So when we learned of Gene-Z’s potential, we were excited about having its first public plant pathogen demonstration at our conference.”

Gene-Z was developed using a grant from the Michigan Economic Development Corp. and AquaBioChip, a startup company MSU helped launch.

For more information on the conference, visit https://ucanr.org/sites/NPDN.