The new top editor of The New York Times told a Yale audience Friday that her overriding mission is to enforce the paper’s high standards as it continually adapts to the dynamics of digital age news delivery.

“What joins us every day is that we’re all working to produce the best news report in the world,” Jill Abramson, the Times’ executive editor, said during a packed Berkeley College Master’s Tea held at Sterling Memorial Library.

This means focusing the Times staff on what she called “the raw materials” of superior journalism — deep, fair reporting and analysis, and graceful writing — despite the time pressures of a ceaseless Internet news cycle. 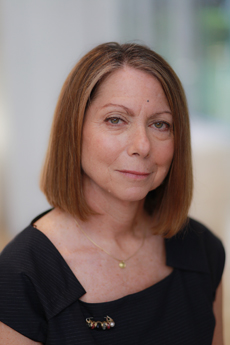 Yale and The New York Times are bound by “the worship of words — and words that matter," said Jill Abramson during her campus talk. Image credit: Yale University

Abramson, a Berkeley College Fellow who taught a journalism class at Yale from 2007 through spring 2011, said this specifically requires resisting the temptation “to view digital publication as you-can-correct-it-later.”

Abramson was named the Times’ top editor in June and took over in September, the first woman to hold the job in the news organization’s 160-year history.

A Harvard College graduate, she was the Times’ managing editor from 2003 to summer 2011, serving as the top deputy to former executive editor Bill Keller during the tumult of two U.S. wars, Hurricane Katrina, the 2008 Presidential election and years of global financial crisis. She joined the Times in 1997 and was chief of the paper’s Washington bureau from late 2000 to mid-2003.

Abramson, who has a home in nearby Madison, Connecticut, came to New Haven Friday to receive an award from the International Festival of Arts and Ideas. It was presented by the festival’s executive director, Mary Lou Aleskie, who praised Abramson as an “inspiration.”

The festival’s Visionary Leadership Award, honoring Jean M. Handley, a founding director of the festival, is presented annually to an individual whose trailblazing work is impacting the world.

Afterward, Abramson met with the staff of the Yale Daily News and attended the tea, where she was introduced by Marvin Chun, master of Berkeley College and professor of psychology.

“Yale students are additionally fortunate for Jill Abramson’s commitment to education, as she taught journalism for several years here, and I’ve been lucky to know her as a Berkeley fellow,” Chun said.

In opening remarks and a wide-ranging, hour-long conversation with the audience, Abramson said the Times and Yale She discussed the use of anonymous sourcing; the publication of stories with national security implications; the anxiety of supervising reporters whose work puts them in danger; the future of The New York Times Book Review; and the ambitions of News Corp chair and chief executive Rupert Murdoch, among other topics.

Abramson also addressed what it was like for her to be a subject, rather than an agent, of journalism — specifically of last month’s New Yorker profile by Ken Auletta.

“It was definitely disconcerting for months to know he was out there,” she said, noting that he interviewed more than 60 people for the piece. “I was nervous, I admit.”

Still, she said, every journalist should have the tables turned on him or her: “It is a very healthy experience for any journalist to be written about.”

Given the Times’ influence in public affairs, Abramson said she tries to manage the paper’s power and responsibility judiciously, notwithstanding the freedoms of the press in the United States.

One of the hardest and rarest decisions for a serious American journalist to make, she noted, is withholding information, especially about government activities related to national security. Abramson said good judgment at times requires her at least to consider it.

“My attitude always with such events was to hit the pause button and hear out the arguments,” she said. “You can’t go in with a stubborn attitude that the government will never have a legitimate argument.”

Despite the economic pressures on traditional media in the digital age, the Times continues to invest heavily in the resources necessary to produce a deep and serious news report, and would do so under her leadership, she asserted.

The Times has more foreign bureaus and correspondents than ever before, she said, and has significantly beefed up personnel focused on digital news — producers, video journalists and social media experts.

Regarding the The Times Book Review, she praised it as “a cherished part of our news report,” and noted that the paper continues to employ three full-time book reviewers for the daily editions of the paper as well.

“I think I would be sent to the guillotine by our readers if we cut back on the space devoted to [books],” she said.

As for the future of the Times’ print products overall, she said the specific mechanism of delivery remains less important than the quality of the news reported.

“I don’t sit around each day worrying too much, or asking myself, how long will the print report survive,” she said.

The Berkeley Master’s Tea was supported by the Poynter Fellowship in Journalism, administered by the Office of Public Affairs and Communications.