COLUMBIA, Mo. ­— The most common ailment to affect a horse is lameness. A University of Missouri equine veterinarian has developed a way to detect this problem using a motion detection system called the “Lameness Locator.” Now, Kevin Keegan, a professor of equine surgery in the College of Veterinary Medicine at MU, has found that his Lameness Locator can detect lameness earlier than veterinarians using the traditional method of a subjective eye test. 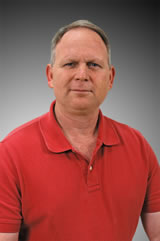 Kevin Keegan, a professor of equine surgery in the College of Veterinary Medicine at MU, has developed a system to effectively assess horse lameness. Image credit: University of Missouri

The Lameness Locator, which is now in commercial use, places small sensors on the horse’s head, right front limb and croup, near the tail. The sensors monitor and record the horse’s torso movement while the horse is trotting. The recorded information is then transferred to a computer or mobile device and compared against databases recorded from the movement of healthy horses and other lame horses. The computer is then able to diagnose whether or not the horse is lame.

In a new study published in the Equine Veterinary Journal, Keegan and co-author Meghan McCracken, an equine surgery resident at MU, put special adjustable shoes on horses that temporarily induced symptoms of lameness. The horses were then monitored by the Lameness Locator as well as by a number of veterinarians using any lameness testing methods they wished. If no lameness was detected by either the veterinarians or the Lameness Locator, the special shoes were adjusted slightly to increase the symptoms of lameness. This process was repeated until both the Lameness Locator and the participating veterinarians properly identified in which leg of the horse the lameness was occurring. Keegan and McCracken found that the Lameness Locator was able to correctly identify lameness earlier than veterinarians using subjective eye test methods more than 58 percent of the time and more than 67 percent of the time when the lameness occurred in the hind legs of the horse. Keegan attributes this to the sensors’ high sensitivity levels.

“There are two reasons why the Lameness Locator is better than the naked eye,” Keegan said. “It samples motion at a higher frequency beyond the capability of the human eye and it removes the bias that frequently accompanies human subjective evaluation.”

Because equine lameness may begin subtly and can range from a simple mild problem affecting a single limb to a more complicated one affecting multiple limbs, veterinarians and horse owners know that early detection is the key to successful outcomes.

“If veterinarians can detect lameness earlier, before it gets too bad, it makes treatment much easier,” Keegan said. “Lameness often goes undetected or undiagnosed entirely, which can cause owners to retire horses earlier than needed, simply because they cannot figure out why the horses are unhealthy. The Lameness Locator should be able to help with that as well.”