An often-overlooked form of manganese, an element critical to many life processes, is far more prevalent in ocean environments than previously known, according to a study led by University of Delaware researchers that was published this week in Science.

The discovery alters understanding of the chemistry that moves manganese and other elements, like oxygen and carbon, through the natural world. Manganese is an essential nutrient for most organisms and helps plants produce oxygen during photosynthesis.

“You wouldn’t think manganese is that important, but without manganese, we wouldn’t have the molecular oxygen that we breathe,” said study co-author George Luther, Maxwell P. and Mildred H. Harrington Professor of Oceanography in the School of Marine Science and Policy within UD’s College of Earth, Ocean, and Environment. 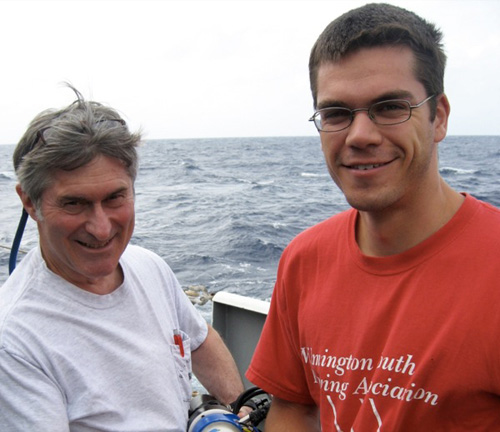 The eighth-most common metal in the earth’s crust, manganese rapidly changes between oxidation states while reacting with other elements in the environment.

Traditionally, manganese(II) and manganese(IV) were believed to be the dominant forms in aquatic environments. But in the mid-2000s, Luther found in a surprising result that manganese(III) was also present in a Black Sea “transition zone,” an area where oxygen levels are relatively high near the surface but gradually diminish deeper down in the water. 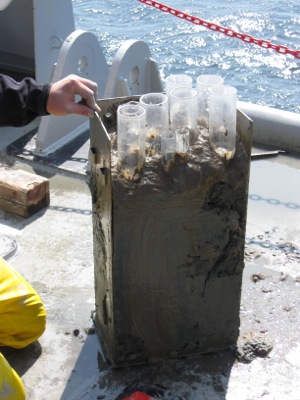 A sediment sample from the Gulf of Saint Lawrence. Photo courtesy of George Luther

Suspecting that this intermediary form was far more widespread than the somewhat unique conditions of the Black Sea, he and his Canadian colleagues Bjørn Sundby of the University of Quebec at Rimouski and Al Mucci of McGill University, whom he has worked with more than 20 years, set out for the largest estuary in the world: the Gulf of Saint Lawrence off the southeast corner of Canada.

There they pulled up samples of mud from the seafloor, where in the top few inches of sediment, there is also a transition zone of diminishing oxygen amounts. Andrew Madison, lead author on the Science paper and Luther’s former graduate student, used a new technique to differentiate between manganese forms.

“It was a bit frustrating, and I spent about two and a half years working through methodological challenges and complications,” said Madison, who finished his doctorate last year and now works as geochemist at Golder Associates Inc. in New Jersey. “But it was also pretty rewarding when I finally got something to work.”

His results showed that manganese(III) comprised up to 90 percent of the total manganese present in the Canadian study sites. The implication is that the metal is found in other marine environments where there is a gradation of oxygen concentrations, whether in the water column of the Black Sea, sediment in the Gulf of Lawrence or a Delaware salt marsh.

“We saw it all through the Saint Laurentian Estuary where we studied,” Luther said. “We did some work in a local salt marsh and found it. Wherever we’ve been able to look for it, we’ve found it. By implication, it should be found in all ocean sediments.” 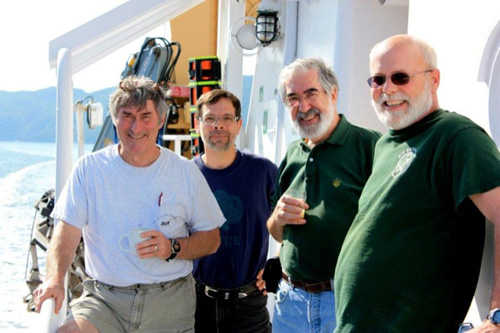 The findings help explain anomalies in manganese models that have puzzled scientists. Other researchers studying manganese did not make specific measurements for manganese(II) versus manganese(III), Luther said. Rather, they measured total dissolved manganese and assumed it was the former.

This missing link in the manganese cycle may shed light on the complex connections between the biology, geology and chemistry — called biogeochemistry — in ocean environments.

The biogeochemistry of marine sediments revolves around organic matter, like bits of dead algae, that fall through the water to the bottom of the ocean. Bacteria consume that debris, setting off a chain of reactions.

“In sediments, bacteria prefer to consume molecular oxygen and nitrate first due to their high energy gain,” Madison said. “After those are consumed, bacteria then couple organic matter oxidation to manganese oxide reduction, which can produce soluble manganese(III).”

In their paper, the researchers call for the conceptual model of the sedimentary redox cycle to be revised to include dissolved manganese(III).

“Manganese is helpful to produce organic matter in the surface waters through photosynthesis,” Luther said. “But in the sediments, the higher oxidation state manganese is used to decompose organic matter. So it’s a really interesting cycle.”

Luther, his students and his Oregon Health & Science University collaborator, Brad Tebo, plan to return to Canada to continue work on the microbiology and chemistry of the processes, hopefully to find out which organisms are helping the manganese oxidation process.

The study, titled “Abundant porewater Mn(III) is a major component of the sedimentary redox system,” appears in the Aug. 23 issue of Science.

The research was funded by the National Science Foundation and the Natural Sciences and Engineering Research Council of Canada. The Delaware Sea Grant College Program supported the development of the technique to determine manganese species.