Human and chimp brains look anatomically similar because both evolved from the same ancestor millions of years ago. But where does the chimp brain end and the human brain begin?

A new UCLA study pinpoints uniquely human patterns of gene activity in the brain that could shed light on how we evolved differently than our closest relative. The identification of these genes could improve understanding of human brain diseases like autism and schizophrenia, as well as learning disorders and addictions.

The research appears Aug. 22 in the advance online edition of the journal Neuron.

“Scientists usually describe evolution in terms of the human brain growing bigger and adding new regions,” said principal investigator Dr. Daniel Geschwind, the Gordon and Virginia MacDonald Distinguished Professor of Human Genetics and a professor of neurology at the David Geffen School of Medicine at UCLA. “Our research suggests that it’s not only size but the rising complexity within brain centers that led humans to evolve into their own species.” 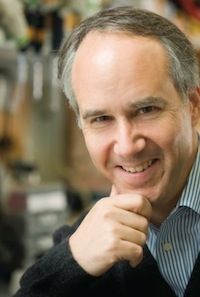 Dr. Daniel Geschwind is UCLA's Gordon and Virginia MacDonald Distinguished Professor of Human Genetics, a professor of neurology at the David Geffen School of Medicine at UCLA and a professor of psychiatry at the Semel Institute. Image credit: University of California

Examining post-mortem brain tissue, Geschwind and his colleagues used next-generation sequencing and other modern methods to study gene activity in humans, chimpanzees and rhesus macaques, a common ancestor of both chimpanzees and humans, which allowed them to see where changes emerged between humans and chimps. They zeroed in on three brain regions: the frontal cortex, the hippocampus and the striatum.

By tracking gene expression, the process by which genes manufacture the amino acids that make up cellular proteins, the scientists were able to search the genomes for regions where the DNA diverged between the species. What they saw surprised them.

“When we looked at gene expression in the frontal lobe, we saw a striking increase in molecular complexity in the human brain,” said Geschwind, who is also a professor of psychiatry at the Semel Institute for Neuroscience and Behavior at UCLA.

While the caudate nucleus remained fairly similar across all three species, the frontal lobe changed dramatically in humans.

“Although all three species share a frontal cortex, our analysis shows that how the human brain regulates molecules and switches genes on and off unfolds in a richer, more elaborate fashion,” said first author Genevieve Konopka, a former postdoctoral researcher in Geschwind’s lab who is now the Jon Heighten Scholar in Autism Research at the University of Texas Southwestern Medical Center. “We believe that the intricate signaling pathways and enhanced cellular function that arose within the frontal lobe created a bridge to human evolution.”

The researchers took their hypothesis one step further by evaluating how the modified genes were linked to changes in function.

“The biggest differences occurred in the expression of human genes involved in plasticity — the ability of the brain to process information and adapt,” said Konopka. “This supports the premise that the human brain evolved to enable higher rates of learning.”

One gene in particular, CLOCK, behaved very differently in the human brain. Considered the master regulator of circadian rhythm, CLOCK is disrupted in mood disorders like depression and bipolar syndrome.

“Groups of genes resemble spokes on a wheel — they circle a hub gene that often acts like a conductor,” said Geschwind. “For the first time, we saw CLOCK assuming a starring role that we suspect is unrelated to circadian rhythm. Its presence offers a potentially interesting clue that it orchestrates another function essential to the human brain.”

When comparing the human brain to the brains of non-human primates, the researchers saw more connections among gene networks that featured FOXP1 and FOXP2. Earlier studies have linked these genes to humans’ unique ability to produce speech and understand language.

“Connectivity measures how genes interact with other genes, providing a strong indicator of functional changes,” Geschwind said. “It makes perfect sense that genes involved in speech and language would be less connected in the non-human primate brains and highly connected in the human brain.”

The UCLA team’s next step will be to expand their comparative search to 10 or more regions of the human, chimpanzee and macaque brains.

The research was supported by grants from the National Institute of Mental Health (R37MH060233 and R00MH090238); a NARSAD Young Investigator Award; the National Center for Research Resources (RR00165) and the Office of Research Infrastructure Programs/OD (P51OD11132); and a James S. McDonnell Foundation grant (JSMF 21002093).