People are able to detect, within a split second, if a hurtful action they are witnessing is intentional or accidental, new research on the brain at the University of Chicago shows.

The study is the first to explain how the brain is hard-wired to recognize when another person is being intentionally harmed. It also provides new insights into how such recognition is connected with emotion and morality, said lead author Jean Decety, the Irving B. Harris Professor of Psychology and Psychiatry at UChicago.

“Our data strongly support the notion that determining intentionality is the first step in moral computations,” said Decety, who conducted research on the topic with Stephanie Cacioppo, a research associate (assistant professor) in psychology at UChicago. They published the results in a paper, “The Speed of Morality: A High-Density Electrical Neuroimaging Study,” to be published Dec. 1 and now on early preview in the Journal of Neurophysiology. 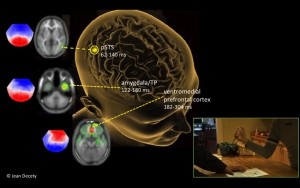 Researchers found that areas of the brain linked to moral decision-making were activated in adults who watched videos of people suffering intentional harm. There was no such response when the harm was accidental. Image courtesy of Jean Decety

The researchers studied adults who watched videos of people who suffered accidental harm (such as being hit with a golf club) and intentional harm (such as being struck with a baseball bat). While watching the videos, brain activity was collected with equipment that accurately maps responses in different regions of the brain and importantly, the timing between these regions. The technique is known as high-density, event-related potentials technology.

The intentional harm sequence produced a response in the brain almost instantly. The study showed that within 60 milliseconds, the right posterior superior temporal sulcus (also known as TPJ area), located in the back of the brain, was first activated, with different activity depending on whether the harm was intentional or accidental. It was followed in quick succession by the amygdala, often linked with emotion, and the ventromedial prefrontal cortex (180 milliseconds), the portion of the brain that plays a critical role in moral decision-making.

There was no such response in the amygdala and ventromedial prefrontal cortex when the harm was accidental.

Other studies with functional MRI scans, including those in Decety’s lab, have shown that those areas of the brain become activated when people see others intentionally harmed, but those studies have been unable to separate or time the way the various parts of the brain may work together.

“High-density EEG/ERPs can identify spatio-temporal patterns of communication between regions that contrast analyses (such as fMRI) with low temporal resolution may not detect, and such methods are necessary to advance knowledge of neuroscience of morality,” said Cacioppo.

The ability to recognize and respond emotionally to the intentional infliction of harm is a critical source of morality that is universal across cultures, researchers believe. “It is part of humans’ evolutionary heritage,” Decety said. “The long history of mammalian evolution has shaped our brains to be sensitive to signs of suffering of others. And this constitutes a natural foundation for morality and sensitivity to justice.”

The new research suggests that emotion and the perception of intentionality, rather than deliberate reasoning, comprise the vital first component of moral responses—at least for responses that stem from care for others, Decety said.

The research may help inform other areas of neurodevelopment research, including studies of the moral responses of psychopaths and of children who lack empathy for others, displaying what are called callous-unemotional traits.