Harmful Protein-Coding Mutations in People arose Largely in the Past 5,000 to 10,000 Years

A study dating the age of more than 1 million single-letter variations in the human DNA code reveals that most of these mutations are of recent origin, evolutionarily speaking. These kinds of mutations change one nucleotide – an A, C, T or G – in the DNA sequence. Over 86 percent of the harmful protein-coding mutations of this type arose in humans just during the past 5,000 to 10,000 years.

Some of the remaining mutations of this nature may have no effect on people, and a few might be beneficial, according to the project researchers. While each specific mutation is rare, the findings suggest that the human population acquired an abundance of these single-nucleotide genetic variants in a relatively short time.

“The spectrum of human diversity that exists today is vastly different than what it was only 200 to 400 generations ago,” said Joshua Akey, associate professor of genome sciences at the University of Washington in Seattle. He is one of several leaders of a multi-institutional effort among evolutionary geneticists to date the first appearance of a multitude of single nucleotide variants in the human population.

Their findings appear in the Nov. 28 edition of Nature. The lead author is Dr. Wenqing Fu of the UW Department of Genome Sciences. 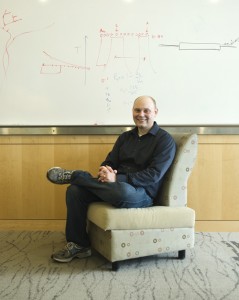 The work stems from collaboration among many genome scientists, medical geneticists, molecular biologists and biostatisticians at the UW, the University of Michigan, Baylor College of Medicine in Houston, the Broad Institute at MIT and Harvard, and the Population Genetics Working Group. The study is part of the Exome Sequencing Project of the National Heart, Lung, and Blood Institute at the National Institutes of Health,

To place this discovery in the context of the prehistory and ancient history of people, humans have been around for roughly 100,000 years. In the Middle East, cities formed nearly 8,500 years ago, and writing was used in Mesopotamia at least 5,500 years ago.

The researchers assessed the distribution of mutation ages by re-sequencing 15,336 protein-coding genes in 6,515 people. Of them, 4,298 were of European ancestry, and 2,217 were African.

The researchers based their explanation for the enormous excess of rare genetic variants in the present- day population on the Out-of-Africa model of the human diaspora to other parts of the world.

“On average, each person has about 150 new mutations not found in either of their parents,” Akey said. “The number of such genetic changes introduced into a population depends on its size.” Larger populations, continuing to multiply by producing children, have more opportunities for new mutations to appear. The number of mutations thereby increases with accelerated population growth, such as the population explosion that began 5,115 years ago.

During the Out of Africa migration of some early humans into Europe and beyond some 50,000 years past, a population bottleneck occurred: The number of humans plummeted, and the shrinking remnant became more genetically similar. Back then, mutations that were only slightly damaging had a greater probability of being carried from one generation to the next, Akey explained.

“Those mutations don’t influence the ability to survive and reproduce,” he said. “The Out of Africa bottleneck led to inefficient purging of the less-harmful mutations.”

His group found that, compared to Africans, people of European descent had an excess of harmful mutations in essential genes — those required to grow to adulthood and have offspring — and in genes linked to Mendelian, or single-mutation diseases.

The study team also observed that the older the genetic variant, the less likely it was to be deleterious. In addition, certain genes, they learned, harbored only younger, more damaging, mutations that surfaced less than 5,000 years ago. These include 12 genes linked to such diseases as premature ovarian failure, Alzheimer’s, hardening of the heart arteries, and an inherited form of paralysis.

The scientists also noted that mutations affecting genes involved in metabolic pathways – chemical reactions in the body to generate and tap energy – tended not to be weeded out by selective forces. Aberrant metabolism contributes to diabetes, lipid disorders, obesity, and insulin resistance – all common, modern scourges.

The researchers pointed out that the results illustrate the profound effect recent human evolutionary history has had on the burden of damaging mutations in contemporary populations.

Although the enlarged mutational capacity resulting from population growth has led to a greater incidence of genetic disorders among the world’s 7 billion people, there is brighter side to the story.

Mutations have fostered the great variety of traits seen among modern humans, according to the researchers, who added, “They also may have created a new repository of advantageous genetic variants that adaptive evolution may act upon in future generations.”