Initial findings from one of the largest cognitive science experiments ever conducted have shown that mobile games can be used to reliably address psychology questions, paving the way to a better understanding of how cognitive function differs across populations.

With its first comprehensive set of results published today, the Great Brain Experiment, a free mobile app run by neuroscientists at the Wellcome Trust Centre for Neuroimaging at UCL, uses ‘gamified’ neuroscience experiments to address scientific questions on a scale that would not be possible using traditional approaches. The app investigates memory, impulsivity, risk-taking and happiness. By playing the games, anyone can anonymously compare their abilities to the wider population and contribute to real scientific research. More than 60,000 people have taken part so far. 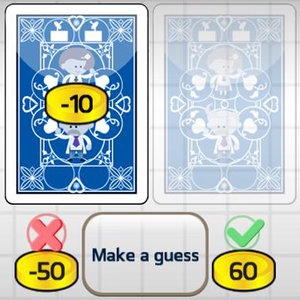 One of the games from The Great Brain Experiment app. Image credit: University College London

The results, published in the journal PLOS ONE, demonstrate that mobile games can be used to reliably conduct research in psychology and neuroscience, reproducing well-known findings from laboratory studies. The small size of standard laboratory studies means they can be limited in their ability to investigate variability in the population at large. With data sent in from many thousands of participants, the scientists at UCL can now investigate how factors such as age and education affect cognitive functions. This new way of doing science enables questions to be addressed which would not previously have been practical.

Writing in the journal PLOS ONE, the researchers explained: “Smartphone users represent a participant pool far larger and more diverse than could ever be studied in the laboratory. By 2015, there will be an estimated two billion smartphone users worldwide. In time, data from simple apps could be combined with medical, genetic or lifestyle information to provide a novel tool for risk prediction and health monitoring.”

The Great Brain Experiment was funded by the Wellcome Trust and first released as part of last year’s Brain Awareness Week. Building on its initial success, the researchers have recently added four new games, including a “coconut shy” which tests people’s ability to perform under pressure. From this, the scientists hope to better understand how people make accurate movements in difficult situations. Going forward, they are calling on the public to download the app and throw coconuts to help science.

Rick Adams, a developer of The Great Brain Experiment based at the Wellcome Trust Centre for Neuroimaging at UCL, said: “The initial aim was simply to make the public more aware of cognitive neuroscience experiments, and how they are conducted. However, with such large numbers of people downloading the app and submitting their results, it rapidly became clear that there was the potential for studying task performance at an unprecedented scale.”

Harriet Brown, a researcher at the Wellcome Trust Centre for Neuroimaging at UCL, said: “It is hoped that carefully measuring performance on a range of tasks may give rise to a better understanding of common mechanisms that underlie performance on these different tasks. Through better understanding of these common mechanisms, we may be able to characterise how they are altered in neurological and psychiatric disease.”