Mild cooling of the brain after a head injury prevents the later development of epileptic seizures, according to an animal study reported this month in the Annals of Neurology.

Epilepsy can result from genetics or brain damage. Traumatic head injury is the leading cause of acquired epilepsy in young adults. It is often difficult to manage with antiepileptic drugs. The mechanisms behind the onset of epileptic seizures after brain injury are not known . There is currently no treatment to cure it, prevent it, or even limit its severity. 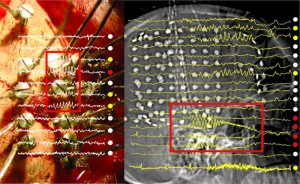 EEGs, a measurement of electrical activity in the brain, superimposed over images of the brain. The red boxes call out a possible epileptic episode. Image courtesy of Raimondo D’Ambrosio (Click image for larger view)

The multi-institutional research team used a rodent model of acquired epilepsy in which animals develop chronic spontaneous recurrent seizures -the hallmark of epilepsy- after a contusive head injury similar to that causing epilepsy in humans. The rats were randomized to either mock-cooling or cooling of the contused brain by no more than 2 Celsius degrees. This degree of cooling, the authors explained, is known to be safe and to decrease mortality of patients with head injury. The rats were then monitored for four months after injury and epilepsy was evaluated by intracranial EEG. The contused brain was cooled continuously with special headsets engineered to passively dissipate heat. No Peltier cells or other power sources for refrigeration were needed.

The investigators report that cooling by just 2 degrees celsius for 5 weeks beginning 3 days after injury virtually abolished the later development of epileptic seizure activity. This effect persisted through the end of the study. The treatment induced no additional pathology or inflammation, and restored neuronal activity depressed by the injury.

“These findings demonstrate for the first time that prevention of epileptic seizures after traumatic brain brain injury is possible, and that epilepsy prophylaxis in patients could be achieved more easily than previously thought, said the lead author of the study, Raimondo D’Ambrosio, UW associate professor of neurological surgery. He added that a clinical trial is required to verify the findings in head injury patients. 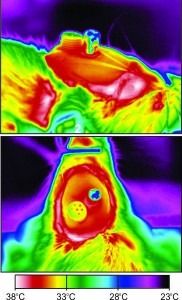 – By Susan Gregg And Leila Gray