At the Electronic Entertainment Expo (E3) in Los Angeles, Microsoft announced a robust lineup of new Xbox 360 games, including a new installment of the blockbuster Halo franchise. The company also unveiled new content and entertainment experiences for Xbox LIVE and smart devices.

LOS ANGELES – The Xbox 360 console charged into its seventh Electronic Entertainment Expo (E3) today buoyed by a bundle of blockbuster game releases led by Halo 4 and a set of new entertainment experiences that will push Xbox farther into the living room, and onto PCs, tablets and phones.

Microsoft also revealed a set of new Xbox content, partners and apps – including bringing Internet Explorer to the console for the first time. The company also introduced a new music service and Xbox SmartGlass, a new app that brings an immersive entertainment experience to all devices.

“It’s a big year,” says Yusuf Mehdi, chief marketing officer for Microsoft’s Interactive Entertainment Business. He notes that Xbox 360 this year will continue its evolution from a game console to a game and entertainment console. “Xbox should be the first place you go when you want entertainment in the living room, or on your phone or Windows 8 PC or tablet.”

Since launching Xbox 360 in 2005, Microsoft has sold 67 million consoles and currently has 40 million Xbox LIVE customers. The company has also sold 19 million Kinects, the hands-free and voice controller that works with the console.

“Seven years in and with a 47 percent share of the console market in the U.S., Xbox 360 has truly hit its stride and become a centerpiece in the living room,” Mehdi says.

This success, he says, is in large part due to Xbox LIVE, which offers a flood of entertainment options, and to Kinect, which transformed the Xbox 360 into a completely new device. “This year we’re transforming yet again because we’re bringing a whole new line of games and entertainment, and through our software work we have revitalized Xbox 360 in a way that gives you richer voice controls, better gestures and even more entertainment,” Mehdi says.

True to the Xbox 360’s core gaming origins, this holiday’s blockbuster game title lineup includes “Halo 4” and the return of Master Chief, as well as new titles from the Forza, Fable, Gears of War, Call of Duty, Madden and other epic franchises.

“We are committed to making sure Xbox is always home to the biggest blockbusters,” says David Dennis, group public relations manager for Microsoft’s Interactive Entertainment Business. “It’s shaping up to be one of the biggest holidays in history, which is unprecedented given that we’re going into year seven of the Xbox 360’s life cycle. It’s going to be an amazing holiday for people who love games.” 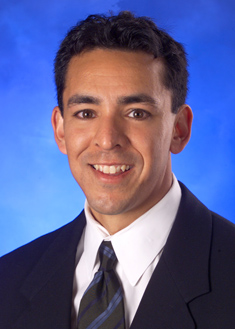 There will be new games for Kinect, such as TV show-inspired “South Park,” “Lazer,” the new “Dance Central” installment, and a round of newly Kinect-enabled games such as “Splinter Cell.”

“Games are really starting to shine with Kinect,” Mehdi says. “The games really light up, whether you’re in ‘EA’ calling in plays with your voice or you’re playing ‘Splinter Cell’ and can say, ‘Hey,’ and get an enemy to come over when you’re hiding behind a rock. There are just great scenarios.”

Xbox LIVE already has more than 200,000 pieces of content available in movies, television, music, sports and fitness, many of which can be searched and powered by your voice or gestures with the power of Kinect. “We want more content for more people, all made better with Xbox, Xbox LIVE and Kinect,” Dennis says. “We’re working to bring a broad, diverse set of content to Xbox, from Comedy Central to Nickelodeon to Univision – something for everyone in every house.”

Microsoft has also announced a partnership with Nike, unveiling “Nike+ Kinect Training,” an exclusive new home fitness program. The custom program, created by some of Nike’s top athlete trainers, is specially designed to help athletes of all levels achieve their fitness goals in the comfort of their own homes.

Xbox Music, also coming this fall, will bring the best of popular existing services to one place, letting the customer purchase music or subscribe to music on the console – and also on any cloud-connected device.

“It’s the music service we’ve always dreamed of building, so it will really be the best of download-to-own or subscription music,” Mehdi says. “You’ll be able to personalize and share with your friends, and best of all, discover new music and integrate it with your Windows 8 PC, tablet and phone.”

The console is the primary gateway to TV, movies, music and other entertainment for a growing number of people around the world, says Mehdi, who adds that more people now use Xbox to watch movies than they do to play games. Xbox LIVE subscribers spend an average of 84 hours per month on the console.

And it’s not just passive viewing – Xbox 360 entertainment packs an integrated, immersive punch. For example, people who watch “Monday Night Football” on Xbox LIVE will be able to watch the game with friends sitting on couches all spread across the country, talking trash all the while. Along the same vein, watching “Ultimate Fighting Championship” will be participatory, with viewers picking who they think will win a match, and baseball fans, who can switch between multiple Major League Baseball games whenever they want.

While watching TV or movies on Xbox in the living room, most people have their phone or tablet in hand or nearby. Imagine, then, if that device knew what you were watching and offered unique ways to become even more immersed in that entertainment.

Enter Xbox SmartGlass, a “breakthrough” new free app for all kinds of devices, including Windows Phone, Windows 8, and other major platforms.

“SmartGlass takes all of your devices and first makes them all work together, and second works in concert with your Xbox to unleash a whole bunch of new scenarios,” Mehdi says. “Imagine being on the couch and watching a show or a game and having your tablet suddenly light up with information, and as things occur in the show, the tablet updates. It’s really, really cool.”

SmartGlass means using your tablet to draw up a play in the Xbox 360 “Madden Football” game before watching the play executed to perfection on your television. SmartGlass means watching a movie and being presented with bonus features and related content on your phone or tablet without having to lift a finger.

With Internet Explorer coming to Xbox, SmartGlass also means exploring and controlling your favorite websites on your TV with a swipe, pinch or zoom on your tablet or phone’s touchscreen.

“In the past when people have tried to put a Web browser on the TV, the experience has always been difficult to navigate,” says Lisa Worthington, senior public relations manager for Microsoft’s Interactive Entertainment Business. “You need to have something to input text easily, but keyboards and mice don’t really belong in the living room and using a remote is awkward.”

With SmartGlass, people can now use their phone or tablet to type text, pinch and zoom, and even pin their favorite sites directly to the Xbox dashboard.

“We recognize that people have these second devices in their hands while they’re consuming TV,” she says. “But what they don’t have is an experience where those devices are talking to each other and the television. Right now devices don’t keep up in the living room. What we’ve done is create an app that will release on all major devices and will enable devices to interact with your Xbox.”

Take HBO’s hit show “Game of Thrones” – with SmartGlass, fans of the show can now not only watch, but explore locations, characters, interactive maps and intricate family trees while watching the show.

Though the SmartGlass app will also support other major platforms, it’s “going to be best on Windows 8 devices,” Mehdi says.

“We think it’s a win-win for consumers and a win-win for our business, because you’ll be able to use any device that you have, but you’ll want to use a Windows 8 tablet or Windows phone,” he says.