Ceramics Tell the Story of an Ancient Southwest Migration

Another look at a nearly 80-year-old pottery collection at the Arizona State Museum is yielding new information about migrants who abandoned the Four Corners region.

Approximately eight centuries ago, people living along the Colorado Plateau in what is now the Four Corners area faced a crisis. Environmental changes that devastated their agricultural practices and likely aggravated social unrest forced significant numbers of these people to move away.

Many of them headed south into central and southern Arizona and western New Mexico, into lands already inhabited by well-established groups.

What is remarkable about this diaspora is that while there is no written record of what happened, much of what archaeologists know is told in the ceramic bowls, plates and figurines that were created and left behind when those civilizations later collapsed. 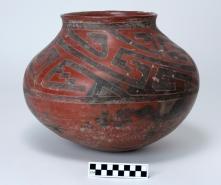 Patrick Lyons, acting associate director of the Arizona State Museum at the University of Arizona and head of the museum’s collections, has been analyzing hundreds of ceramics from Kinishba, the ruins of an 800-room pueblo just below the Mogollon Rim in east-central Arizona.

Lyons’s results will be published later this year by the Arizona State Museum Archaeological Series as a chapter in “Kinishba Lost and Found: Mid-Century Excavations and Contemporary Perspectives.”

Lyons, who also is an associate professor in the UA School of Anthropology, said his work is a re-analysis of earlier studies, many of which were done by UA archaeologists. The diaspora from the Kayenta region has, in fact, been studied extensively over the last 80 years.

It started in the 1930s. Byron Cummings, the first head of what was then the UA archaeology department, excavated Kinishba. The pueblo is just one of the sites where migrants fleeing the north settled.

Cummings and the students in his field school collected hundreds of ceramic objects, “bushels upon bushels,” he wrote, that spoke to “their individual tastes and skills.” There were pots used for cooking and for storage. Other vessels were used to serve food, sometimes for large groups. There were miniatures and animal effigies. They came in different colors and were hand-painted, or embossed or even perforated. 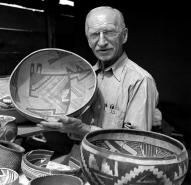 The earliest studies of Kinishba pottery were published by UA students for their master’s degrees. Unfortunately, the mindset of most archaeologists of that era was geared more toward collecting and less on analysis.

Lyons said more sophisticated excavation techniques and improved analytical methods developed since then has led to a greater understanding of these materials and the people who made them. New discoveries also have made Kinishba a key piece of the puzzle of what happened.

Kinishba, said Lyons, is a bit overlooked as a source of archaeological data, in part because of the haphazard way materials were collected and documented, and because a fire in Cummings’ home destroyed many of his field notes. Emil Haury, who succeeded Cummings, later moved the UA field school to other pueblos at Forestdale, Point of Pines and Grasshopper, and made scientific analysis a more important component of the excavations.

What has become apparent is that local pottery-making at Kinishba and elsewhere was heavily influenced by the techniques brought by the new settlers from the north, including perforated plates and specific painted patters on bowls and jars. While some ceramics were imported, some at great distances, others were made with local materials. 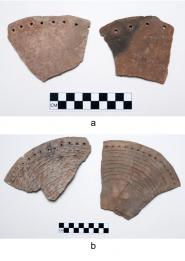 “What a lot of archaeologists are looking to reconstruct is specialization,” Lyons said. “It used to be thought that every village produced its own pottery. Now, we know how to match pottery to the raw materials they were using. There was quite a bit of exchange going on.”

“What it seems like on the Colorado Plateau and on the Rim just below is that not every household had a pottery producer, but in most cases there were many individual pottery producers in a village,” he said

“However, there was a lot of material that came in from outside. There also was a lot of movement of pottery, what we call ‘circulation,’ because sometimes it is not clear whether the pottery is moving in exchange for something else, or being brought in as part of a movement of people – migration. Researchers want to distinguish between those two processes whenever possible.”

Lyons said that the movement of goods points to “relationships” being developed among communities. Some villages specialized in pottery. Others made specialized stone tools or jewelry carved from sea shells.

Excavations by ASM archaeologist Charles Adams at Homolovi, for example, offer convincing evidence that people there grew and wove cotton that they could traded for other goods, especially the prized Jeddito Yellow Ware pottery made on the Hopi mesas.

But Kinishba’s pottery is important because it includes markers of people from the Kayenta region.

“Southwestern archaeologists have been working for a long time on the evidence of people moving out of the Four Corners region and into other places,” said Lyons. “There is lots of good evidence of this in Winslow (Homolovi). The classic case is at Point of Pines. Grasshopper Pueblo is another. Recently, my colleagues and I have been working in the San Pedro Valley to document this as well.

“But what was not known was how much evidence was at Kinishba, which is right in the midst of the other pueblos.” 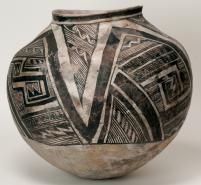 In addition to providing material for master’s theses and doctoral dissertations, Kinishba was the focus of a report by Cummings in the 1940s. Lyons said the collection has been studied off and on over the years, but never systematically approached in a holistic way. What was needed was a look at the entire assemblage in terms of variability and dates and how the site relates to others nearby.

What became clear from new analysis, he said, is that Kinishba is at the “epicenter” of the migration from Kayenta down to the confluence of the Gila and San Pedro rivers.

Daniela Triadan, an associate professor in the UA School of Anthropology, has been investigating where the materials used in Kinishba pottery originated. Lyons said her work will, among other thiings, help illuminate personal relationships there and in other communities where people migrated.

“My colleagues and I have argued about is whether and how these enclaves of immigrants that we’re identifying in different places, maintain connections with one another. One thing we see at Kinishba that we don’t see in other places is a lot of pottery that seems to come from Point of Pines. Triadan has already shown connections between Kinishba and Grasshopper.

“But what we now also are seeing is what looks like evidence of links between Point of Pines and Kinishba. Maybe friends and relatives who used to live together in the north country are maintaining connections after they have to leave the Four Corners region. High-tech sourcing techniques can help reveal these connections.”

Lyons said archaeologists have only begun to scratch the surface of Kinishba in terms of what is going on within the site and how it grew and changed over time. Cummings and his students wrote room numbers and other information on the vessels and fragments they collected.

By going back to what written information remains, it may still be possible to correlate materials with the oldest and newest parts of the pueblo, determining when the migrants came and how contacts among communities were maintained

Samples of Kinishba pottery and other southwestern ceramics are on display at the Arizona State Museum.