Open a door and watch what happens — the hinge allows it to open and close, but doesn’t permanently bend. This simple concept of mechanical motion is vital for making all kinds of movable structures, including mirrors and antennas on spacecraft. Material scientists at NASA’s Jet Propulsion Laboratory in Pasadena, California, are working on new, innovative methods of creating materials that can be used for motion-based mechanisms.

When a device moves because metal is flexing but isn’t permanently deformed, that’s called a compliant mechanism. Compliant mechanisms are all around us — in springs, surgical instruments, paperclips, clothespins and even micro-devices.

Researchers at JPL, Brigham Young University in Provo, Utah, and the California Institute of Technology in Pasadena, describe a new methodology for creating complex, low-cost compliant mechanisms using a combination of novel materials and manufacturing techniques in a recent paper featured on the cover of the journal Advanced Engineering Materials. They demonstrate that materials called “bulk metallic glasses” have highly desirable properties for these mechanisms. These “glasses,” as the scientists call them, are metal alloys designed to have a random arrangement of atoms. 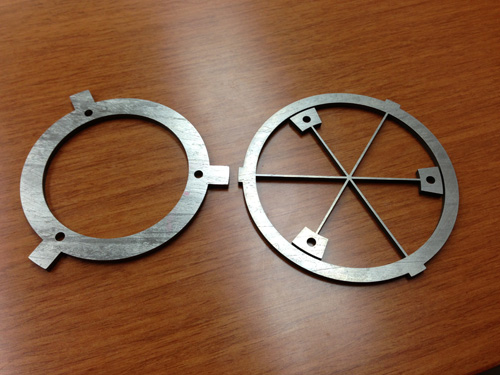 This image shows components of a mirror structure that can be rotated very precisely by flexing parts made of a material scientists call “bulk metallic glass.” Image credit: NASA/JPL-Caltech

“We’ve demonstrated that these metals not only have desirable properties for applications where flexibility and durability are required, but can also be injection-molded like a plastic and made cheaply,” said Douglas Hofmann, principal investigator of the research at JPL. Hofmann is a researcher in material science and metallurgy at JPL, and visiting associate at Caltech. “It offers an entirely new industry for high-performance metals,” he said.

“Traditionally, titanium alloys have been used in compliant mechanisms because they were the best materials for the job, but titanium was also difficult to work with,” said Larry Howell, professor at Brigham Young University and study co-author. The new research shows that bulk metallic glasses have twice the strength and conventional flexibility of titanium alloys, while also boasting low melting temperatures.

“I had been working on flexible mechanisms for a long time, and I said, that’s the perfect material we’ve been looking for all along,” said Brian Trease, a mechanical engineer at JPL who was a co-author on the study. 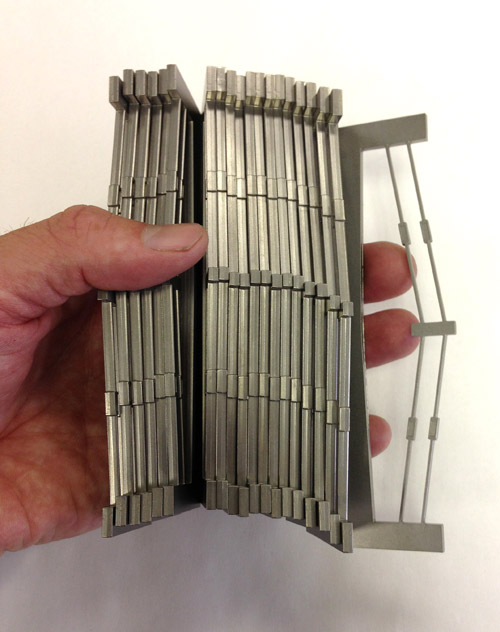 Although material scientists have been focusing on the 3-D printing of titanium alloys, the new research shows that complex shapes can be molded at low cost, while maintaining their performance, when using bulk metallic glasses.

“You could start making robot bearings or artificial limbs out of these if you want,” said Eric Homer, assistant professor of mechanical engineering at Brigham Young and lead author of the study. “These materials are ideal for mechanisms where you’re looking for flexibility and high strength.”

In the new study, the researchers modeled the performance of a number of compliant mechanisms and predicted that bulk metallic glasses would be the highest performing material in those applications, typically doubling the predicted performance of titanium. To verify the model, a bistable spring, a device that can lock in two different positions, was made out of both titanium and metallic glass and mechanically tested to show the benefits. The researchers then worked with two commercial companies to fabricate more than 30 identical versions of the new mechanism, utilizing a brand new injection-molding technology available in industry.

“Demonstrating that these complex devices can be designed and prototyped using basic science is one thing. Taking the next step and working with industry to actually fabricate them will, we hope, bridge the gap between what we do in the lab and what we can deliver as actual spacecraft hardware,” said Hofmann.

The researchers also demonstrated the assembly of various bulk metallic glass components into a larger mount used to rotate a mirror.

“We hope that using these mechanisms in space will allow us to increase precision in our instruments and decrease their mass,” Hofmann said. “They may also prove useful for storing elastic energy that can be used in space to deploy components without having to use motors.”

Hofmann and co-authors from JPL and Brigham Young envision applications for aerospace and defense. Sporting goods such as golf clubs could be made of these materials, and so could medical implants that need to flex in the body such as hip replacement components. On spacecraft, metallic glasses could be used for tilting and positioning mirrors, or for structures that open antennas or shoot cube satellites out of spacecraft. If metallic glasses can be made en mass like plastics, but retain robust properties of metals, they could also be used for a wide assortment of consumer devices, from laptops to robots to cars.