Meet Pentecopterus, a new predator from the prehistoric seas

You don’t name a sea creature after an ancient Greek warship unless it’s built like a predator.

That’s certainly true of the recently discovered Pentecopterus, a giant sea scorpion with the sleek features of a penteconter, one of the first Greek galley ships. A Yale University research team says Pentecopterus lived 467 million years ago and could grow to nearly six feet, with a long head shield, a narrow body, and large, grasping limbs for trapping prey. It is the oldest described eurypterid — a group of aquatic arthropods that are ancestors of modern spiders, lobsters, and ticks.

A detailed description of the animal appears in the Sept. 1 online edition of the journal BMC Evolutionary Biology.

“This shows that eurypterids evolved some 10 million years earlier than we thought, and the relationship of the new animal to other eurypterids shows that they must have been very diverse during this early time of their evolution, even though they are very rare in the fossil record,” said James Lamsdell, a postdoctoral associate at Yale University and lead author of the study.

“Pentecopterus is large and predatory, and eurypterids must have been important predators in these early Palaeozoic ecosystems,” Lamsdell said. 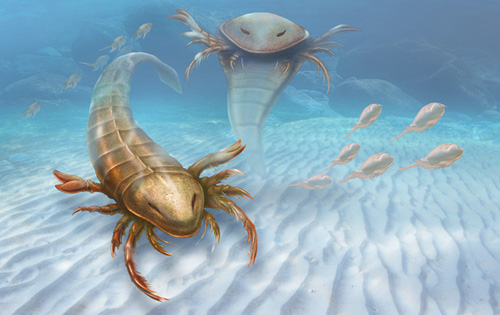 Geologists with the Iowa Geological Survey at the University of Iowa discovered the fossil bed in a meteorite crater by the Upper Iowa River in northeastern Iowa. Fossils were then unearthed and collected by temporarily damming the river in 2010. Researchers from Yale and the University of Iowa have led the analysis.

The fossil-rich site yielded both adult and juvenile Pentecopterus specimens, giving the researchers a wealth of data about the animal’s development. In addition, the researchers said, the specimens were exceptionally well preserved.

“The Winneshiek site is an extraordinary discovery,” said Yale paleontologist Derek Briggs, co-author of the study. “The fossils are preserved in fine deposits of sediments where the sea flooded a meteorite impact crater just over 5 km in diameter.” Briggs is the G. Evelyn Hutchinson Professor of Geology and Geophysics at Yale and curator of invertebrate paleontology at the Yale Peabody Museum of Natural History.

“What’s amazing is the Winneshiek fauna comprise many new taxa, including Pentecopterus, which lived in a shallow marine environment, likely in brakish water with low salinity that was inhospitable to typical marine taxa,” said Huaibao Liu of the Iowa Geological Survey and the University of Iowa, who led the fossil dig and is a co-author of the paper. “The undisturbed, oxygen-poor bottom waters within the meteorite crater led to the fossils’ remarkable preservation. So this discovery opens a new picture of the Ordovician community that is significantly different from normal marine faunas.”

The National Science Foundation supported the research. Additional co-authors of the study were Robert M. McKay and Brian Witzke of the Iowa Geological Survey and the University of Iowa.