Medieval Manuscripts to Get Technological Makeover

The world’s largest collection of Anglo-Saxon (Old English) poetry may soon be available on a smart device App, as part of a project initiated by the University of Exeter.

The App is in its prototype stage of development but in time will introduce school age pupils to the world of medieval manuscripts and the history of the book.

The initial stage will be based around Exeter Cathedral’s famous Exeter Book (10th century) which features the Exeter Riddles, a collection of 96 literary mysteries. The University of Exeter’s Modern Languages department is working in collaboration with Antenna International to create the App which will reveal the secrets of medieval literature to a new audience. The research into the prototype model was initially funded by Research & Enterprise in Arts & Creative Technology (REACT) and Higher Education Innovation Funding (HEIF). 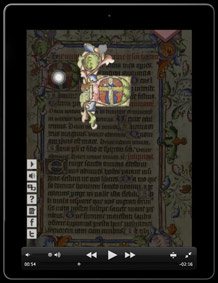 Unlike in a library, where books are freely accessible, people rarely see these manuscripts as they have to be kept in secure storage. This is partly due to their fragility and high value. The extensive damage to the Exeter Book with its missing pages, glue stains, and partially burnt sections illustrates just how miraculous its survival is. The Exeter Manuscripts project aims to reverse the historic invisibility of these amazing old books, and help Devon to rediscover its written heritage.

Dr Emma Cayley, Head of Modern Languages & Senior Lecturer in French at the University of Exeter, is excited at the prospect of creating a way to share the richness of medieval literature. Dr Cayley said: “It’s a way of getting pupils to engage with Devon’s neglected written and cultural heritage. In the normal course of their curriculum, pupils never usually get a chance to study any medieval literature, and would not have any contact with the original books that contained these stories. Through the App they will gain a new appreciation by going on a journey into the past to discover the history of the places the manuscripts come from and the people and communities that made and owned these incredible and beautiful objects. They will be able to engage directly with images and stories from the manuscripts themselves.”

The Exeter Manuscripts Project held three study workshops in local schools, in order to introduce young people to the history of the manuscript book, and discuss the design of the App. Dr Emma Cayley led the workshops with Sara Hurley, Story Worker and Community Artist, and Cara Patterson, Visual Artist and Illustrator. Pupils from Isca College, St. Sidwell’s C. E. Primary, and Exeter College helped to design the App, and fed into its development, becoming co-creators as well as detectives tracing their local heritage.

Kelda Richards, a teacher from Isca said: “Our pupils had a fantastic day working on the project. It brought medieval manuscripts to life for them and they were excited by the prospect of being able to interact with the ‘real thing’ via an App. Literature of this age is not normally freely accessible to school children but the intrigue of the Exeter Riddles and beauty of the artwork is engaging.”

She added: “The pupils were excited to be asked for their views on what they would like to see in an App and came up with a host of ideas including unlocking levels, putting manuscripts back together like a jigsaw and creating their own pieces of medieval writing.”

As part of these workshops and in response to the Exeter Book Riddles, pupils composed and illustrated the riddles which form part of an exhibition currently on display in Exeter Cathedral. Many clever riddles were created by pupils including this one by Isca Media Arts College.

I am the future of your words,
The echo of your voice.
I know the clue to your past
And what’s yet to come.
I am a match to your hand,
The key to your success.
You use me everyday
But don’t realise that I’m there;
I can bring your thoughts to life.
What am I?

The solution to the riddle can be found at the ‘From Medieval Manuscripts to Calligraffiti’ exhibition in Exeter Cathedral until 4 November. The exhibition in the Chapel of St James and St Thomas in Exeter Cathedral explores Devon’s written heritage from the earliest medieval manuscripts, through the dawn of printing and early printed books, to modern calligraphy and the arrival of the e-book and kindle.

The Cathedral is running a series of talks and workshops to coincide with the exhibition. This will include a talk about the Exeter Book, creative workshops to make ‘calligraffiti’ tags and workshops that will allow the public to get up close to the manuscripts themselves. The Cathedral Librarian, Peter Thomas, and Christine Faunch, Head of Heritage Collections at the University of Exeter Library’s Special Collections Department, will give three workshops throughout the day on 31 October that will provide insights into the history of the objects, the journeys they have undertaken, and the stories they contain. It will include Devon’s Syon Abbey manuscripts which are a relic of the Bridgettine Order of nuns, unbroken since 1415, and now part of the University’s Special Collections.