An analysis of a quality measure that Medicare Advantage plans self-report to the government finds that the insurers almost always err in their own favor. More elderly receive high-risk medications than the plans acknowledge, according to the study published Sept. 30 in Annals of Internal Medicine.

PROVIDENCE, R.I. [Brown University] — A new study reveals widespread inaccuracy in a quality measure that is self-reported by Medicare Advantage health plans. Researchers found that the vast majority in a sample of 172 such insurers significantly understated their rate of high-risk medication prescriptions.

The average rate of prescribing at least one of about 100 medicines deemed risky for the elderly was 26.9 percent of patients over 65, according to the researchers’ calculations, compared to the 21.1 percent of patients reported by the plans. The average plan, therefore, reported a rate that was 5.8 percentage points better than it actually was. Across the country that amounts to about 500,000 more seniors receiving high-risk medications than health plans reported, according to the authors’ calculations. 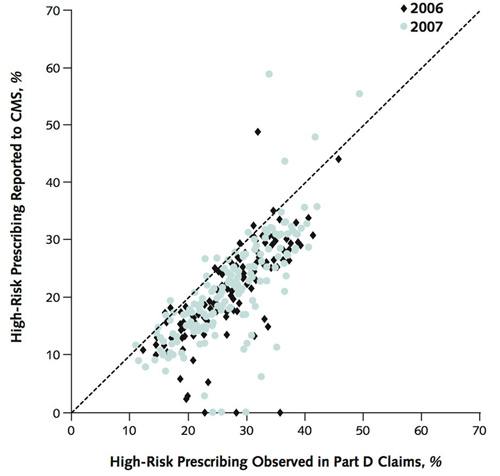 The study appears Sept. 30 in Annals of Internal Medicine.

The findings are based on a comparison of the rates the plans reported to the government’s Healthcare Effectiveness Data and Information Set (HEDIS) for 2006 and 2007 with rates the researchers calculated for each plan during the same years, using data from Medicare Part D drug claims. The researchers used a random sample of about 1,000 patients enrolled in each of those plans.

“We’re using the same sources of data that Medicare Advantage plans are supposed to be using to derive this information,” said lead author Alicia Cooper, a former Brown doctoral student who now works for the State of Vermont.

To motivate Medicare Advantage health plans to improve health care delivery, Medicare evaluates and pays the plans based in part on dozens of quality measures such as the rate of prescribing about 100 medicines deemed risky for seniors. Plans must report their data to HEDIS. That data is also made available to consumers who can use it to determine which plans provide the best quality care.

Corresponding author Dr. Amal Trivedi, associate professor of health services policy and practice at the Brown University School of Public Health, said it was notable that 95 percent of plans erred in their own favor, and that only nine of 172 plans came within 1 percent of the rate the researchers calculated.

“We can’t say anything about motive, but the direction is important in that they underreport the use of these medications,” said Trivedi, who is also a physician and researcher at the Providence V.A. Medical Center. “Their stated performance is much better than their actual performance.”

“The plans that were the most accurate were the ones that suffered the greatest penalties when using the plan-reported rates,” Trivedi said.

Trivedi also noted that the inaccuracies have skewed comparisons between Medicare Advantage plans and Medicare fee for service. His team’s calculated rates show that Medicare Advantage is not decisively better, but instead that the two forms of Medicare coverage are very similar for high-risk prescription rates.

Cooper said she and Trivedi were motivated to look at the data not merely to learn about rates of high-risk prescribing but more generally to assess the accuracy of a self-reported, unaudited quality measure. Medicare policy and consumer choices depend on the integrity of that data.

High-risk prescribing provides a relatively easy way to assess self-reporting. The prescribing data are readily available from just a few public sources, the list of high-risk drugs is widely known, and the rules defining which patients to include are unambiguous.

“There is reason to believe that if there is inaccuracy in this relatively straightforward measure, there could be inaccuracy in other more complicated measures as well,” Cooper said.

In their paper in Annals, the researchers suggest that the government may want to increase oversight of the data reported by Medicare Advantage plans.

“Policymakers should consider routine audits of publicly reported quality measures, including the HEDIS indicator of high-risk prescribing, to ensure the validity and reliability for patients and other stakeholders,” they wrote.

In addition to Trivedi and Cooper, co-authors David Dore and Vincent Mor are Brown professors and Providence V.A. researchers. Other authors are Lewis Kazis and Edith Nourse Rogers of Memorial Veterans Hospital in Bedford, Mass.

The National Institute on Aging and the Health Assessment Lab provided funding for the study.