“If our LPA electron bunches had good enough quality for free electron lasers – and were really only femtoseconds long – we should see a particular kind of radiation called coherent optical transition radiation, or COTR,” Leemans says. “So I assigned my doctoral student Chen Lin, a graduate of Peking University and now a postdoc there, to find it.” 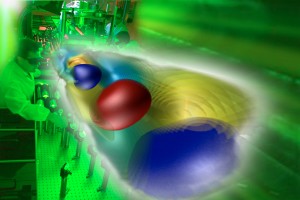 A typical LOASIS set-up, background, accelerates electron beams to energies of a billion electron volts. The plasma channel of the accelerator may be confined in a capillary or punched through a supersonic jet of dense hydrogen gas. In the foreground, a “boosted frame” simulation shows how electrons surf the plasma wave generated by a laser pulse. (Photo Roy Kaltschmidt, simulation Jean-Luc Vay and colleagues, Lawrence Berkeley National Laboratory)

Jeroen van Tilborg of LOASIS worked with Lin on the experiment. “Free electron lasers and other applications require energy spreads even lower than the few-percent level that has been measured in LPAs, which doesn’t sound promising,” he says. “But in a free electron laser, it’s the energy spread in a longitudinal slice that matters. Slice-energy spread is local, as distinct from variation among all electron energies anywhere in the pulse.”

If the team could find coherent optical transition radiation in the beam, it would be a direct measure of slice-energy spread. This kind of optical radiation is emitted when a pulse of near-light-speed electrons crosses the boundary between states with different electrical properties – in this case, the boundary between vacuum and an ultrathin Mylar foil.

However, Van Tilborg says, “COTR had only recently been observed in LPA beams and wasn’t thought useful for diagnosis.” Sure enough, says Leemans, “At first Chen said ‘It doesn’t work.’ But she kept at it.”

The team devised a three-step process. The first step was to manipulate the electron beams inside the accelerator to induce modulations in momentum. If the momentum modulations could be preserved, it would be an indication of a low slice-energy spread. Monitoring the beam structure would be a way of calculating the spread in the slice.

The first step turned out to be easier than anticipated, Leemans says. “We found that when the drive laser pulse overlaps the electron beam pulse that it’s accelerating, the frequency of the drive laser itself induces correlated momentum modulations in the electron pulse. It’s a well-known phenomenon that is widely used in conventional accelerators to aid with bunch compression.”

Conventional free electron lasers routinely monitor microbunching by means of coherent optical transition radiation, but using the technique with LPAs had not been tried before because many people thought the density modulations would disappear as the beam spread and diverged. Part of the solution was counterintuitive – moving the diagnostic foils much farther away from the accelerator.

“In the next step we allowed the beam to travel through a vacuum for several meters,” says van Tilborg. “The differences in momentum caused the electrons to collect at different densities, creating microstructure in the pulse. The initial momentum modulations of the beam had now been converted to density modulations.”

To measure slice-energy spread, momentum modulations are imposed on the beam in the accelerator. The electron beam (multiple pulses shown for clarity) is sampled by a spectrometer near the accelerator and by a phosphor screen at the end of its path. After the drive laser is deflected, electron pulses continue through vacuum, where their momentum modulations become microstructural density modulations. Encountering Mylar foils at 2.3 meters from the accelerator and again at 3.8 meters, the microstructure of the pulse strongly enhances coherent optical transition radiation (COTR). Electron and COTR photon patterns (insets, right) are compared with theoretical predictions to determine beam quality. Image credit: Berkeley Lab

After traveling two meters, the beam encountered the first of two Mylar foils. Crossing the first vacuum/Mylar interface, it generated the expected optical-transition radiation – and generated it again at the second foil, almost four meters distant. Photons from both COTR emissions were recorded by CCD cameras. Finally the electron pulse itself was recorded on a phosphor screen.

“From theoretical calculations, we know what the pattern of optical transition radiation should be,” van Tilborg says, noting that the coherent regime can be identified by smaller structures on the CCD image and an enhancement in particle counts. “If the micromodulations survive the long trip – due to a small slice energy spread – then the second coherent contribution will also appear. So where there’s microstructure in the pulse, there is strong enhancement.”

Energy spread and beam divergence had not washed out the micromodulations, with the result that, van Tilborg says, “A slice-energy-spread diagnostic had now become available to us.” In a series of experiments testing different conformations of the accelerator, the lowest energy spread resulted from high-energy electrons in high-density plasma.

“Pulse structure depended on the fine tuning of several factors,” van Tilborg says, “including plasma density, bunch charge” – the number of electrons in the pulse – “and letting the electron pulse travel the right distance for self-bunching to occur.”

Another factor was how well the drive-laser pulse overlapped with the accelerated electron pulse, but, van Tilborg says, “We don’t really need the overlap to occur in the same plasma channel where the electron beam is produced and accelerated. We can use other ways of ‘seeding’ the microstructure of the pulse. From what we’ve learned, we can design much better diagnostics in the future.”

The experiment showed that local energy spread in an LPA can be a lot smaller than a few percent. In some of the cases measured, it was less than half a percent.

“These experiments not only show that laser-plasma accelerators already produce very high-quality electron beams,” say Geddes, “they also gives us the physics insight into how particles are trapped in the wake and then modulated within it, allowing us to move closer to using these new, compact machines for physics and other applications.”

Leemans says, “Both the Plateau and Lin experiments use radiation emission from the LPA-produced electron beams — some in the x-ray window, some in the visible light regime — to tell the story of what the electrons in the beam look like – one detected inside the accelerator, the other outside it.”

For Part One of State-of-the-Art Beams From Table-Top Accelerators, visit https://newscenter.lbl.gov/feature-stories/2012/10/22/lpa-beams-part-1.