The 2011 Arctic sea ice extent maximum that marks the beginning of the melt season appears to be tied for the lowest ever measured by satellites, say scientists at the University of Colorado Boulder’s National Snow and Ice Data Center.

The CU-Boulder research team believes the lowest annual maximum ice extent of 5,650,000 square miles occurred on March 7. The maximum ice extent was 463,000 square miles below the 1979-2000 average, an area slightly larger than the states of Texas and California combined. The 2011 measurements were tied with those from 2006 as the lowest maximum sea ice extents measured since satellite record keeping began in 1979.

Virtually all climate scientists believe shrinking Arctic sea ice is tied to warming temperatures in the region caused by an increase in human-produced greenhouse gases being pumped into Earth’s atmosphere. Because of the spiraling downward trend of Arctic sea ice extent in the last decade, some CU scientists are predicting the Arctic Ocean may be ice free in the summers within the next several decades. 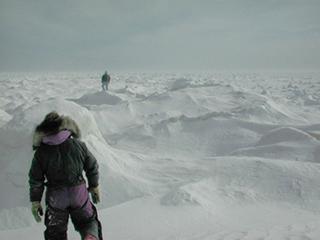 The seven lowest maximum Arctic sea ice extents measured by satellites all have occurred in the last seven years, said CU-Boulder Research Scientist Walt Meier of the National Snow and Ice Data Center, who participated the latest study. “I’m not surprised by the new data because we’ve seen a downward trend in winter sea ice extent for some time now.”

Scientists believe Arctic sea ice functions like an air conditioner for the global climate system by naturally cooling air and water masses, playing a key role in ocean circulation and reflecting solar radiation back into space, said Meier. In the Arctic summer months, sunlight is absorbed by the growing amounts of open water, raising surface temperatures and causing more ice to melt.

“I think one of the reasons the Arctic sea ice maximum extent is declining is that the autumn ice growth is delayed by warmer temperatures and the ice extent is not able to ‘catch up’ through the winter,” said Meier. “In addition, the clock runs out on the annual ice growth season as temperatures start to rise along with the sun during the spring months.”

Since satellite record keeping began in 1979, the maximum Arctic sea ice extent has occurred as early as Feb. 18 and as late as March 31, with an average date of March 6. Since the CU-Boulder researchers determine the maximum sea ice extent using a five-day running average, there is small chance the data could change.

In early April CU-Boulder’s National Snow and Ice Data Center will issue a formal announcement on the 2011 maximum sea ice extent with a full analysis of the winter ice growth season, including graphics comparing 2011 to the long-term record.