ANN ARBOR, Mich.— In the mating game, some female mites are mightier than their mates, new research at the University of Michigan and the Russian Academy of Sciences suggests. The evidence comes, in part, from 40 million-year-old mating mites preserved in Baltic amber.

In a paper published March 1 in the Biological Journal of the Linnean Society, researchers Pavel Klimov and Ekaterina Sidorchuk describe an extinct mite species in which the traditional sex roles were reversed.

“In this species, it is the female who has partial or complete control of mating,” said Klimov, an associate research scientist at the U-M Museum of Zoology. “This is in contrast to the present-day reproductive behavior of many mite species where almost all aspects of copulation are controlled by males.”

In mites, as in other animals including humans, the battle of the sexes has been raging throughout evolutionary history. Each gender struggles to get the upper hand to assure that their interests are protected. In the case of mites, males benefit from coercing females to mate and making sure no other males mate with them. Harassing reluctant females, guarding females before and after mating and fighting off competing males are typical behaviors. 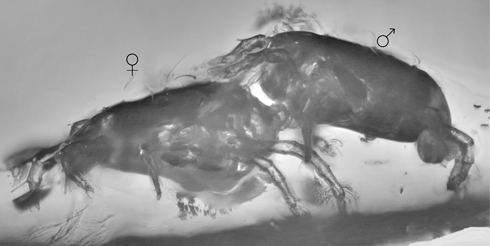 Side view of a mating pair of the extinct mite Glaesacarus rhombeus, preserved in amber. In this species, the usual sex roles are reversed, with females in control of mating. Image credit: Ekaterina Sidorchuk

Females, on the other hand, gain an evolutionary advantage if they have some control over matters of mating. This allows them to choose superior males to mate with, while rejecting losers (who may be, however, extremely adept at coercing females), and it spares them the wear and tear of being subjected to harassment, guarding and frequent copulation.

In the extinct mite species Glaesacarus rhombeus, the male lacks the specialized organs for clinging to females that are seen in many present-day mites. The female, however, has a pad-like projection on her rear end that allows her to control the clinging. A remarkably preserved copulating pair of mites found in amber gave Klimov and Sidorchuk a glimpse at how the apparatus worked.

Structures found in some living mites also show evidence of female control over mating, Klimov said. “Some lineages have developed female copulatory tubes that function like a penis.”

Klimov’s coauthor, Ekaterina Sidorchuk, is a researcher at the Paleontological Institute of the Russian Academy of Sciences.

The research was funded by the National Science Foundation and the Russian Ministry of Education and Science.