Mathematician Sees Artistic Side To Father of Computer

This year a series of events around the world will celebrate the work of Alan Turing, the father of the modern computer, as the 100th anniversary of his birthday approaches on June 23. In a book chapter that will be published later this year, mathematician Robert Soare, the founding chairman of the University of Chicago’s computer science department, will propose that Turing’s achievement was artistic as well as scientific.

Soare, the Paul Snowden Russell Distinguished Service Professor in Mathematics and Computer Sciences, has played a leading role in computability theory — the field that Turing founded and which is devoted to determining how effectively complex mathematical problems can be solved. In Mathematical Logic in the 20th Century, Gerald Sacks ranked a paper Soare published in the Annals of Mathematics as one of the century’s 31 most important papers in mathematical logic, including computability theory. 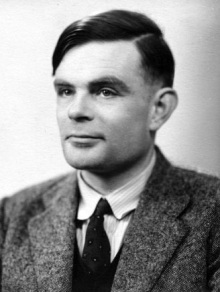 Turing is remembered for developing concepts that made modern computers possible, and for leading complex military decoding efforts that proved critical in World War II. But Soare argues that Turing’s landmark 1936 paper on computability theory contains beauty as well as scientific breakthroughs. He compares the concepts in that paper to Michelangelo’s statue, David. “Michelangelo and Turing both completely transcended conventional approaches. They created something completely new from their own visions, something which went far beyond the achievements of their contemporaries,” Soare writes.

Soare further notes that the work of both men emphasized the human form. “Michelangelo brought out the human form in his statues and the Sistine ceiling. Turing invented a system which simulates how a human being computes, and then demonstrated that his creation did capture human computing,” he wrote.

“Prof. Soare is specially important to the book, Alan Turing — His Work and Impact,” Cooper said. “Turing developed his ideas about computability and computers as a way of answering deep questions about the way the world works. Soare has revived this connection in a very clear and exciting way. He has single-handedly produced what we now see as a ‘Turing Renaissance,’ which makes his work on computability and art specially interesting and appropriate.” 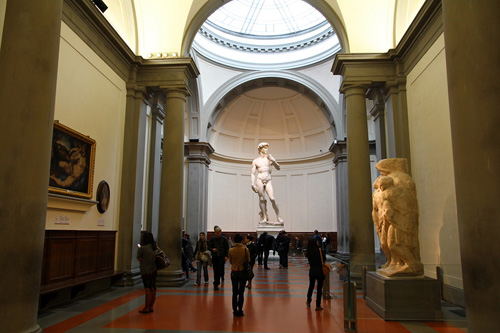 Mathematicians and computer scientists are celebrating 2012 as the centennial of the birthday of Alan Turing, the father of the modern computer. Robert Soare, the Paul Snowden Russell Distinguished Service Professor in Mathematics and Computer Science at UChicago, draws artistic parallels between Michelangelo’s David, pictured here, and Turing’s landmark 1936 paper on computability. Photo by Clayton Tang

Like Turing, Soare is an alumnus of Princeton University. One of Soare’s undergraduate professors at Princeton in the early 1960s, Alonzo Church, served as Turing’s doctoral adviser more than two decades earlier.

Art history has long interested Soare. A reproduction of Michelangelo’s Creation of Adam hangs on his office wall at UChicago. The poster serves as a reminder of the undergraduate courses in art history that he took at Princeton, and of his subsequent viewings of the Renaissance art treasures and of Michelangelo’s statues in Florence, Italy. 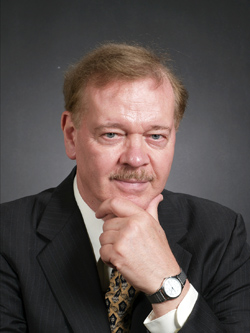 Prof. Robert Soare will deliver the opening plenary address on April 16 at the 2012 British Mathematical colloquium at the University of Kent in Canterbury. His chapter on “Turing and Michelangelo: The Art of Classical Computability,” will appear in Alan Turing — His Work and Impact. Photo by Olin Mills

While presenting and listening to lectures on computability at the Italian Mathematical Summer Center in Bressanone in June 1979, Soare began seeing analogies between what he called classical recursion theory and the classical art of the Italian High Renaissance. He developed a lecture on the analogies, which were published in the conference proceedings, and further expanded his ideas at the July 1982 American Mathematical Society meeting.

In his new “Turing and Michelangelo” chapter, Soare concludes that mathematicians are like artists in that “they choose which problems to work on according to taste and beauty. Like artists, what they produce is evaluated on the basis of beauty as well as mathematical results. The greatest results are those arising from a completely new vision and a profound intuition into the area.”

Turing’s 1936 paper, written when he was a 23-year-old graduate student at Cambridge, opened the field of computability. He invented his automatic machine, now called a Turing machine, to capture the intuitive idea of how human beings calculate. He also introduced a special kind of Turing machine, which he called a universal machine.

“The universal machine simulated any other Turing machine because it took as inputs the program for that machine and an arbitrary input, and processed that input just as the given program would have done,” Soare said. “The universal machine became very useful a few years later when Turing used it in the design of an electronic computer in the United Kingdom during World War II, and John von Neumann used it in the United States for the same purpose.”

Turing died of potassium cyanide poisoning, ostensibly by his own hand, just two weeks shy of his 42nd birthday in 1954. He is still remembered, however, for his mathematical acumen and for his critical work in the British cryptographic service at Bletchley Park during World War II.

The British Government had persecuted Turing as a homosexual in his final years. Decades later, British Prime Minister Gordon Brown lauded him for saving the lives of thousands of British servicemen during World War II. “Winston Churchill could not wait to get the intercepts that Turing delivered. Turing was his favorite man at Bletchley Park,” Soare said.