Some of the figures scientists create are stunning. Others are not – mismatched fonts, poorly aligned tables, clashing colors.  Many fall somewhere in between. A deluge of data presents a challenge to amateur designers, often resulting in a cluttered presentation that can crowd out the figure’s main message.

A group of University of Washington researchers has launched a unique experiment matching science students with those in design. The new Design Help Desk, similar to a writing help desk, offers scientists a chance to meet with someone who can help them create more effective figures, tables and graphs.

“In modern publications, up to half of the space can be taken up by figures,” said principal investigator Marco Rolandi, a UW assistant professor of materials science and engineering. His group studies materials at the nanometer scale, and much of the data is ultimately contained in microscope images.

“As a new faculty member, I was spending a lot of time teaching my students how to make figures for publications, even though I myself didn’t have any formal training,” Rolandi said. 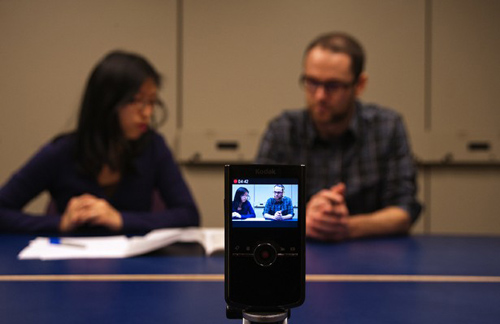 It was a case of the blind leading the blind, he said. Rolandi sought out collaborators on campus, and eventually funding from the National Science Foundation, to create support that until now didn’t exist – and to study how well it works.

The free service runs Mondays and Wednesdays from 11 a.m. to 2 p.m. at the Center for Nanotechnology offices in Fluke Hall. It’s primarily aimed at graduate students in science and engineering, but is open to anybody at the UW who needs help with graphs, figures or other material that conveys complex information.

“We are becoming a more visual culture,” says Karen Cheng, a UW associate professor of design (who also completed a bachelor’s in chemical engineering). Still, most science visuals “could use significant improvement from a visual point of view,” she said. “It’s just not a field where design has been part of the training.”

This hasn’t always been the case. In Galileo’s time, scientists were also trained in art. These days, scientists often produce a graph using Microsoft Excel or PowerPoint’s default settings – which might look fine to them, but may have fundamental design problems.

Meanwhile, even journals are focusing on the importance of figures, often asking authors to improve them before publication. 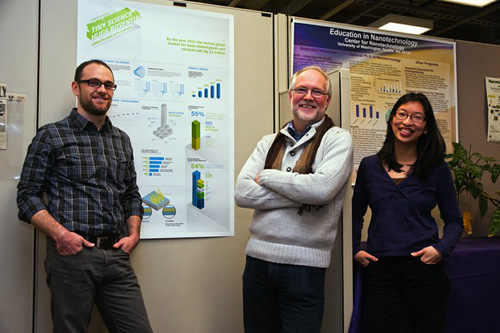 Andrew Salituri (left), a graduate student in design, Kieran O'Mahony (center), a postdoctoral researcher in materials science with a background in education research, and Yeechi Chen (right), a postdoc in materials science with a background in physics, are on the UW team studying data visualization. The white poster is a nanotechnology poster designed by a UW art student. Image credit: Mary Levin, UW Photography

The Design Help Desk also is a study funded by the National Science Foundation about how to better communicate science.

“We want to see whether learning how to design figures and arrange visual elements in space might help scientists better understand or conceptualize what they are trying to communicate,” Rolandi explained. “That’s actually quite novel, because there aren’t many examples of research where the interaction between scientists and designers is observed.”

Clients who arrive for a session at the Design Help Desk are first greeted by postdoctoral researcher Yeechi Chen, who earned her doctorate in physics at the UW and has completed a UW certificate course in natural science illustration. Chen can act as an intermediary between the scientist and the designer, and reassure new clients that scientists are involved in the project.

During the half-hour session, the scientist client and design consultant are alone in the room. The designer first asks the scientist about his or her goals – timeline, stage in the design process, publication venue, and main points to convey. The designers typically use pen and paper to sketch out their ideas.

The session is videotaped for use in the group’s study, if the client agrees. One camera records the face-to-face interaction, while a second camera on the ceiling records the sketching and hand movements.

In a typical session, Andrew Salituri, a UW master’s student in design, or Kinsey Gross, the other design consultant, works to help scientists bring some clarity to the complex information. They try to impart some basic design principles, and create a visual hierarchy so that many elements can be included without having clutter.

Kieran O’Mahony, a UW postdoctoral researcher in materials science and engineering with a background in education research, will analyze the video and study the interactions between the designers and the scientists. He’s looking for “aha!” moments, where knowledge is being transferred. One of the goals of the grant is to see whether this type of setting helps transmit design skills to scientists, and to find out how scientists learn about design.

The team hopes to discover what techniques work best to support classes or workshops teaching design skills to scientists, and at the same time provide a service to science students.

“There are some excellent writing centers at the university,” Rolandi said. “It seems strange to have support just for writing, because writing is only half of the story.”