Gaping crevasses that penetrate upward from the bottom of the largest remaining ice shelf on the Antarctic Peninsula make it more susceptible to collapse, according to University of Colorado Boulder researchers who spent the last four Southern Hemisphere summers studying the massive floating sheet of ice that covers an area twice the size of Massachusetts.

But the scientists also found that ribbons running through the Larsen C Ice Shelf – made up of a mixture of ice types that, together, are more prone to bending than breaking – make the shelf more resilient than it otherwise would be.

The research team from CU-Boulder’s Cooperative Institute for Research in the Environmental Sciences presented the findings Dec. 6 at the American Geophysical Union’s annual meeting in San Francisco.

The Larsen C Ice Shelf is all that’s left of a series of ice shelves that once clung to the eastern edge of the Antarctic Peninsula and stretched into the Weddell Sea. When the other shelves disintegrated abruptly – including Larsen A in January 1995 and Larsen B in February 2002 – scientists were surprised by the speed of the breakup.

Researchers now believe that the catastrophic collapses of Larsen A and B were caused, at least in part, by rising temperatures in the region, where warming is increasing at six times the global average. The Antarctic Peninsula warmed 4.5 degrees Fahrenheit since the middle of the last century.

The warmer climate increased meltwater production, allowing more liquid to pool on top of the ice shelves. The water then drained into surface crevasses, wedging them open and cracking the shelf into individual icebergs, which resulted in rapid disintegration. 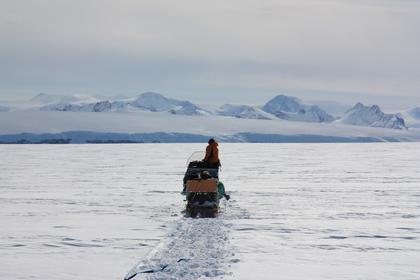 Tom Weston, a field assistant working with the University of Colorado research team, leads the radar survey team across the Larsen C Ice Shelf. Scientists spent four seasons studying the shelf to better understand how its structure may make it more prone to catastrophic collapse in the face of a warming climate. Photo by Dan McGrath

But while the meltwater may have been responsible for dealing the final blow to the shelves, researchers did not have the opportunity to study how the structure of the Larsen A and B shelves may have made them more vulnerable to drastic breakups – or protected the shelves from an even earlier demise.

CU-Boulder researchers did not want to miss the same opportunity on the Larsen C shelf, which covers more than 22,000 square miles of sea.

“It’s the perfect natural laboratory,” said Daniel McGrath, a doctoral student in the Department of Geography and part of the CIRES research team. “We wanted to study this shelf while it’s still stable in order to get a better understanding of the processes that affect ice shelf stability.”

McGrath worked with CIRES colleagues over the last four years to study the Larsen C shelf in order to better understand how the warming climate may have interacted with the shelf’s existing structure to increase its vulnerability to a catastrophic collapse.

McGrath presented two of the group’s key findings at the AGU meeting. The first was the role that long-existing crevasses that start at the base of the shelf and propagate upward – known as basal crevasses – play in making the shelf more vulnerable to disintegration. The second relates to the way a type of ice found in areas called suture zones may be protecting the shelf against a breakup.

The scientists used ground penetrating radar to map out the basal crevasses, which turn out to be massive. The yawning cracks can run for several miles in length and can penetrate upwards for more than 750 feet. While the basal crevasses have been a part of Larsen C for hundreds of years, the interaction between these features and a warming climate will likely make the shelf more susceptible to future disintegration. “They likely play a really important role in ice-shelf disintegration, both past and future,” McGrath said.

The research team also studied the impact of suture zones in the ice shelf. Larsen C is fed by 12 distinct glaciers, which dump a steady flow of thick ice into the shelf. But the promontories of land between the glacial outlets, where ice does not flow into the shelf, allow for the creation of ribbon-like suture zones, which knit the glacial inflows together and which turn out to be important to the ice shelf’s resilience. “The ice in these zones really holds the neighboring inflows together,” McGrath said.

The suture zones get their malleable characteristic from a combination of ice types. A key component of the suture zone mixture is formed when the bottoms of the 12 glacial inflows begin to melt. The resulting freshwater is more buoyant than the surrounding seawater, so it rises upward to the relatively thinner ice zones between the glacial inflows, where it refreezes on the underside of the shelf and contributes to the chaotic ice structure that makes suture zones more flexible than the surrounding ice.

It turns out that the resilient characteristics of the suture zones keep cracks, including the basal crevasses, from spreading across the ice shelf, even where the suture zone ice makes up a comparatively small amount of the total thickness of the shelf. The CIRES team found that at the shelf front, where the ice meets the open sea, suture zone ice constitutes only 20 percent of the total thickness of the shelf but was still able to limit the spread of rifts through the ice. “It’s a pretty small part of the total ice thickness, and yet, it still has this really important role of holding the ice shelf together,” McGrath said.

Other CU researchers involved in the Larsen C project were Konrad Steffen, former director of CIRES; Ted Scambos, of CIRES and CU-Boulder’s National Snow and Ice Data Center; Harihar Rajaram, of the Department of Civil Engineering; and Waleed Abdalati, of CIRES.

CIRES is a joint institute of CU-Boulder and the National Oceanic and Atmospheric Administration.