A Friend in the Fight against Cancer

The U is at the forefront of cancer research in dogs

After more than an hour discussing the shared evolution of dogs and humans, and how the cancer mysteries that lie deep within one may inform and effect treatments on the other, U researcher Jaime Modiano smiles and says, “I love my job.”

He’s at the forefront of an array of exciting research that stands to improve the health of both dogs and people. 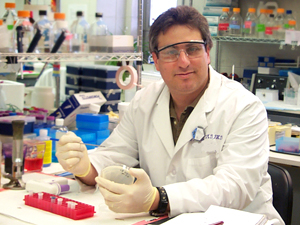 Jaime Modiano is a professor in oncology and comparative medicine and director of the Animal Cancer Care and Research program at the U. Image credit: University of Minnesota

Modiano, the Perlman Professor of Oncology and Comparative Medicine in veterinary clinical sciences, came to the University of Minnesota in 2007 with a charge, he says, to “build a bridge between the Vet School and the Cancer Center” and to leverage the strengths of each.

To pave the way for this, the U created the Animal Cancer Care and Research (ACCR) program, giving researchers the structure to creatively translate their discoveries into therapies, for both dogs and, hopefully, people.

There are several advantages to working with dogs in cancer research, Modiano says, and one is that dogs get cancer naturally.

“We have a population of animals that are getting cancer spontaneously, just like we are,” he says. In addition, the disease progresses more quickly in canines, since their life spans are shorter, which means that researchers can gauge success of different therapies in one to two years—instead of, say, 10 years for people.

However, “cancer is not cancer,” Modiano says. It’s dozens or hundreds of diseases, and within certain types of cancer there are sub-types. “We made a concerted effort to nail down what is it that we’re treating, and when is it similar to humans,” he says.

Even if researchers discover they are treating a type of cancer without a direct counterpart in people, they are doing something to benefit dogs, which is still part of the mission.

Out of ambiguity, options

That care for dogs can be a great elixir for their human companions and caretakers.

It allows veterinarians to go to owners with a range of options—from conservative treatments to cutting-edge therapies—without the constraints of only being able to take the sickest of the sick.

“Some [dog owners] will go very conservative and some will go very aggressive,” Modiano says. “We give people the options and let them make the decisions.”

Modiano beams at the collaboration inherent in the collective work of the ACCR program, which he directs, even if it means he’s shuttling between his office at the College of Veterinary Medicine in St. Paul and his space in the Cancer Center.

“The program really encompasses people at multiple places in the Academic Health Center and there’s a lot of buy-in,” he says. “[We’re here] with our colleagues who are doing the same stuff in mice and in rats and in yeast and in zebra fish. We just happen to be interested in what happens when you look at dogs.”

It’s even more exciting when that work on dogs may also target cancers in people.

Modiano points to the work in brain cancer by Drs. John Ohlfest and Liz Pluhar. More than 95 dogs with brain cancer have participated in trials led by Ohlfest and Pluhar, including 80 in the past two years.

Their work is so promising that a type of brain cancer immunotherapy has received accelerated approval from the Food and Drug Administration for testing in human patients.

For his part, he gets to do groundbreaking cancer research and be a part of a greater whole of researchers dedicated to improving canine—and human—health.

“What more can I ask for?” Modiano says. “It’s really cool to be able to do that.”