Mars Panorama: Next Best Thing to Being There

PASADENA, Calif. — From fresh rover tracks to an impact crater blasted billions of years ago, a newly completed view from the panoramic camera (Pancam) on NASA’s Mars Exploration Rover Opportunity shows the ruddy terrain around the outcrop where the long-lived explorer spent its most recent Martian winter.

This scene recorded from the mast-mounted color camera includes the rover’s own solar arrays and deck in the foreground, providing a sense of sitting on top of the rover and taking in the view. Its release this week coincides with two milestones: Opportunity completing its 3,000th Martian day on July 2, and NASA continuing past 15 years of robotic presence at Mars. Mars Pathfinder landed July 4, 1997. NASA’s Mars Global Surveyor orbiter reached the planet while Pathfinder was still active, and Global Surveyor overlapped the active missions of the Mars Odyssey orbiter and Opportunity, both still in service.

The new panorama is online at https://photojournal.jpl.nasa.gov/catalog/PIA15689 . It is presented in false color to emphasize differences between materials in the scene. It was assembled from 817 component images taken between Dec. 21, 2011, and May 8, 2012, while Opportunity was stationed on an outcrop informally named “Greeley Haven,” on a segment of the rim of ancient Endeavour Crater.

“The view provides rich geologic context for the detailed chemical and mineral work that the team did at Greeley Haven over the rover’s fifth Martian winter, as well as a spectacularly detailed view of the largest impact crater that we’ve driven to yet with either rover over the course of the mission,” said Jim Bell of Arizona State University, Tempe, Pancam lead scientist. 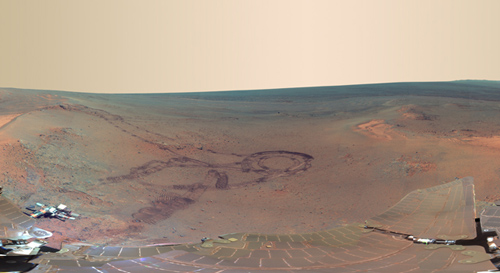 This full-circle scene combines 817 images taken by the panoramic camera (Pancam) on NASA's Mars Exploration Rover Opportunity. It shows the terrain that surrounded the rover while it was stationary for four months of work during its most recent Martian winter. Image Credit: NASA/JPL-Caltech/Cornell/Arizona State Univ.

Opportunity and its twin, Spirit, landed on Mars in January 2004 for missions originally planned to last for three months. NASA’s next-generation Mars rover, Curiosity, is on course for landing on Mars next month.

“Ron Greeley was a valued colleague and friend, and this scene, with its beautiful wind-blown drifts and dunes, captures much of what Ron loved about Mars,” said Steve Squyres of Cornell University, Ithaca, N.Y., principal investigator for Opportunity and Spirit.