Washington, D.C.— It has long been believed that male lions are dependent on females when it comes to hunting. But new evidence suggests that male lions are, in fact, very successful hunters in their own right. A new report from a team including Carnegie’s Scott Loarie and Greg Asner shows that male lions use dense savanna vegetation for ambush-style hunting in Africa. Their work is published in Animal Behavior.

Female lions have long been observed to rely on cooperative strategies to hunt their prey. While some studies demonstrated that male lions are as capable at hunting as females, the males are less likely to cooperate, so there were still questions as to how the males manage to hunt successfully. The possibility that male lions used vegetation for ambushing prey was considered, but it was difficult to study given the logistics and dangers of making observations of lions in densely vegetated portions of  the African savanna. 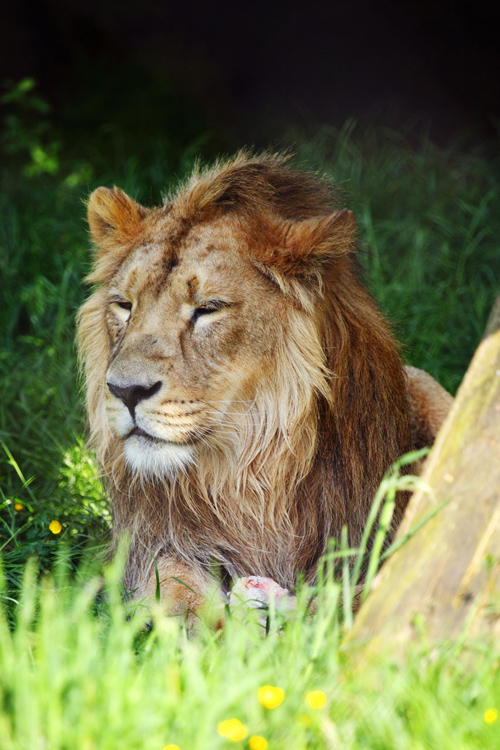 Loarie and Asner, working with Craig Tambling from the University of Pretoria, combined different types of technology to change the game.

First the authors created 3-D maps of the savanna vegetation using laser pulses that sweep across the African plains. They did this using a Light Detection and Ranging (LiDAR) scanner mounted on the fixed-wing Carnegie Airborne Observatory (CAO) aircraft. They combined these 3-D habitat maps with GPS data on predator-prey interactions from a pride of seven lions in South Africa’s Kruger National Park to quantify the lines of sight, or “viewsheds”, where lions did their killing in comparison to where they rested.

They found that while a preference for shade caused both male and female lions to rest in areas with dense vegetation and similarly short viewsheds during the day, the real difference between males and females emerged at night. Female lions both rested and hunted under the cover of darkness in areas with large viewsheds. But at night, male lions hunted in the dense vegetation, areas where prey is highly vulnerable, but which researchers rarely explore. The scientific results show that ambushing prey from behind vegetation is linked to hunting success among male lions, despite lacking the cooperative strategies employed by female lions in open grassy savannas.

“By strongly linking male lion hunting behavior to dense vegetation, this study suggests that changes to vegetation structure, such as through fire management, could greatly alter the balance of predators and prey,” Loarie said.

The authors emphasized that their findings should be confirmed in other studies throughout Africa’s savannas.  Nevertheless, these results could have major implications for park management, which is often heavily involved with manipulating vegetation.

“With large mammals increasingly confined to protected areas, understanding how to maintain their habitat to best support their natural behavior is a critical conservation priority,” Asner said.

This study highlights the rapidly evolving role of high-tech measurements for never-before-undertaken research in geographically complex and often dangerous conditions.  Three-dimensional imaging of ecological habitats by the CAO, along with GPS tracking of species inside those habitats, has opened new doors to understand how species interact with one another throughout their native environments, doors that couldn’t have been opened without these technological advances.