Sea turtles are not a species one would normally associate with the United Kingdom. But on the remote UK overseas territory of Ascension Island, one of the world’s largest green turtle populations is undergoing something of a renaissance.

Writing in the journal Biodiversity and Conservation, scientists from the University of Exeter and Ascension Island Government Conservation Department report that the number of green turtles nesting at the remote South Atlantic outpost has increased by more than 500 per cent since records began in the 1970s. 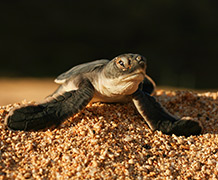 As many as 24,000 nests are now estimated to be laid on the Island’s main beaches every year, making it the second largest nesting colony for this species in the Atlantic Ocean.

Lead author, Dr Sam Weber, said: “The increase has been dramatic. Whereas in the 1970s and 80’s you would have been lucky to find 30 turtles on the Island’s main nesting beach on any night, in 2013 we had more than 400 females nesting in a single evening”.

The scientists’ report comes as Ascension Island Government announces that it is committing a fifth of the territory’s land area to biodiversity conservation. New legislation enacted by the Island’s Governor, Mark Capes, on the 28th of July creates seven new nature reserves and wildlife sanctuaries that include the Island’s three main turtle nesting beaches, along with globally-important seabird colonies that are home to more than 800,000 nesting seabirds.

The legislation was developed during a two year project run by Ascension Island Government and the University of Exeter to develop a national biodiversity action plan for the territory.

Dr Nicola Weber, Ascension Island Government’s Head of Conservation, said: “The decision to give legal protection to our most iconic wildlife sites follows extensive public consultation and has received a high level of support from across of the community. It speaks volumes as to how seriously environmental stewardship is currently taken on the Island”.

Dr Annette Broderick, who is leading the project for the University of Exeter, added: “I am delighted that these globally important nesting sites have been afforded protection. This has been a goal for many years and has been achieved as a result of the dedication of the AI Government team who have been working towards this for several years.”

To trace the origins of the current turtle boom you need to go back to before the Second World War. Dr Broderick of the Centre for Ecology and Conservation, who has been researching sea turtles on Ascension Island for the past 15 years and led the recent study, said: “Green turtles were an important source of food for those on the island and passing ships would take live turtles onboard to ensure fresh meat for their voyage. Ships returning to the UK would stock up with turtles for the Lords of the Admiralty, who had a penchant for turtle soup. Records show a dramatic decline in the number of turtles harvested each year as fewer and fewer came to nest and since the 1950s no turtles have been harvested. We are now seeing the population bounce back, although our models suggest we have not yet reached pre-harvest levels.”

Turtles were legally protected on Ascension Island in 1944 and the population has never looked back. “Because sea turtles take so long to reach breeding age, we are only now beginning to see the results of conservation measures introduced decades ago”, says Dr Weber. “It just goes to show how populations of large, marine animals can recover from human exploitation if we protect them over long enough periods.”

More details about the project, which was funded by the UK Government’s Darwin Initiative, and efforts to conserve Ascension Island’s biodiversity can be found in a new short documentary produced by filmmaker Bryony Stokes.