Topological insulators are an emerging class of materials that act as both insulators and conductors, and could potentially be used in smartphones, computers and other electronic devices.

A research team at the UCLA Henry Samueli School of Engineering and Applied Science has developed a new class of topological insulators in which one of two layers is magnetized. The advance could lead to the development of much more energy-efficient big-data processing systems and ultra-low power electronics.

Led by Kang Wang, the Raytheon Professor of Electrical Engineering at UCLA and the study’s principal investigator, the team demonstrated for the first time that the new topological insulators can be electrically “switched” to make them significantly more energy-efficient than current devices. The research was published April 28 in the journal Nature Materials.

“We are very excited about this important result with the new topological insulators, which should lead to the advancement of future low-power, green electronics,” Wang said. 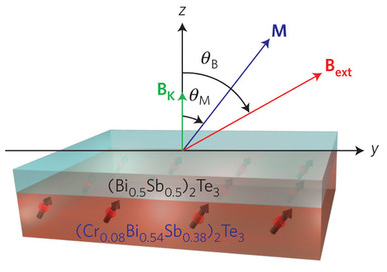 The interiors of topological insulators prevent the flow of electrical currents, but their surfaces allow a current to move with very little resistance. Perhaps most importantly, their surfaces enable the transport of spin-polarized electrons while preventing the “scattering” of electrons that causes energy to be dissipated and wasted.

The topological insulator created at UCLA comprises two layers, one of which contains chromium, a magnetic element. An electrical current that drives spin-polarized electrons can switch the up-down polarity of the magnetic chromium atoms. This switching is what enables the device to write memory or perform calculations.