Made in IBM Labs: Breakthrough Chip Technology Lights the Path to Exascale Computing

The new technology, called CMOS Integrated Silicon Nanophotonics,  is the result of a decade of development at IBM’s global Research laboratories. The patented technology will change and improve the way computer chips communicate – by integrating optical devices and functions directly onto a silicon chip, enabling over 10X improvement in integration density than is feasible with current manufacturing techniques.

IBM anticipates that Silicon Nanophotonics will dramatically increase the speed and performance  between chips, and further the company’s ambitious Exascale computing program, which is aimed at developing a supercomputer that can perform one million trillion calculations—or an Exaflop—in a single second. An Exascale supercomputer will be approximately one thousand times faster than the fastest machine today.

“The development of the Silicon Nanophotonics technology brings the vision of on-chip optical interconnections much closer to reality,” said Dr. T.C. Chen, vice president, Science and Technology, IBM Research. “With optical communications embedded into the processor chips, the prospect of building power-efficient computer systems with performance at the Exaflop level is one step closer to reality.” 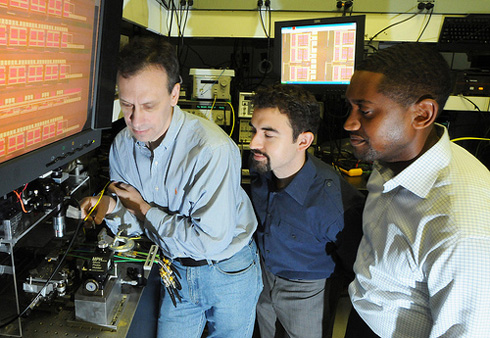 In addition to combining electrical and optical devices on a single chip, the new IBM technology can be produced on the front-end of a standard CMOS manufacturing line and requires no new or special tooling. With this approach, silicon transistors can share the same silicon layer with silicon nanophotonics devices. To make this approach possible, IBM researchers have developed a suite of integrated ultra-compact active and passive silicon nanophotonics devices that are all scaled down to the diffraction limit – the smallest size that dielectric optics can afford.

“Our CMOS Integrated Nanophotonics breakthrough promises unprecedented increases in silicon chip function and performance via ubiquitous low-power optical communications between racks, modules, chips or even within a single chip itself,” said Dr. Yurii A. Vlasov, Manager of the Silicon Nanophotonics Department at IBM Research. “The next step in this advancement is to establishing manufacturability of this process in a commercial foundry using IBM deeply scaled CMOS processes.”

By adding just a few more processing modules to a standard CMOS fabrication flow, the technology enables a variety of silicon nanophotonics components, such as: modulators, germanium photodetectors and ultra-compact wavelength-division multiplexers to be integrated with high-performance analog and digital CMOS circuitry.  As a result, single-chip optical communications transceivers can now be manufactured in a standard CMOS foundry, rather than assembled from multiple parts made with expensive compound semiconductor technology. 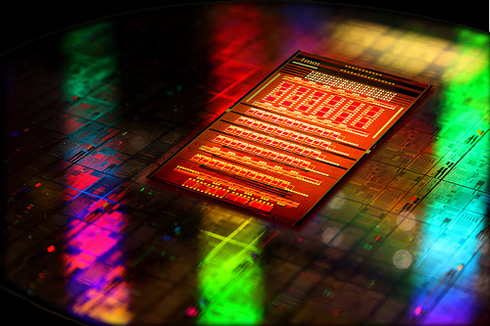 The density of optical and electrical integration demonstrated by IBM’s new technology is unprecedented – a single transceiver channel with all accompanying optical and electrical circuitry occupies only 0.5mm2 – 10 times smaller than previously announced by others. The technology is amenable for building single-chip transceivers with area as small as 4x4mm2 that can receive and transmit over Terabits per second that is over a trillion bits per second.

Additional information on the project can be found at https://www.research.ibm.com/photonics.