PASADENA, Calif. — NASA’s Mars rover Curiosity now has a view of a patch of exposed bedrock scientists selected for a few days of close-up study, the first such study since the rover began its long trek to Mount Sharp two months ago.

Curiosity reached the crest of a rise informally called “Panorama Point.” From Panorama Point, the rover took photographs of a pale-toned outcrop area that the team chose earlier as “Waypoint 1” on the basis of imagery from NASA’s Mars Reconnaissance Orbiter.

Five selected waypoints dot the mission’s route southwestward from the “Glenelg” area, where Curiosity worked during the first half of 2013, and an entry point to the lower layers of Mount Sharp, the mission’s next major destination. Waypoint 1 lies about one-fifth of the way along the approximately 5.3-mile (8.6-kilometer) route, as plotted from examining orbiter images. 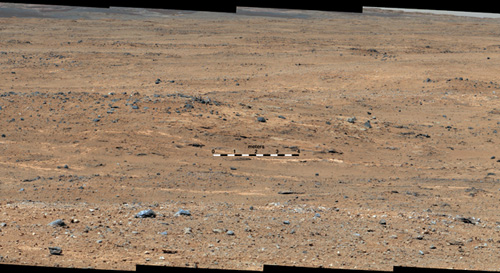 An outcrop visible as light-toned streaks in the lower center of this image has been chosen as a place for NASA’s Mars rover Curiosity to study for a few days in September 2013. Image credit: NASA/JPL-Caltech/MSSS

Curiosity advanced 464 feet (141.5 meters) on Sept. 5 in the longest one-day drive so far in the 13-month-old mission. The drive toward the elevated Panorama Point combined two segments. For a long initial segment, engineers chose the path from images examined on Earth ahead of time. That was followed by a 138-foot (42-meter) segment, for which the rover autonomously navigated its own path based on images taken during the day’s drive. That Sept. 5 drive plus the next one — 80 feet (24.3 meters) on Sept. 8 — brought the rover to the top of Panorama Point.

For the Sept. 5 drive, “we had a long and unobstructed view of the hill we needed to climb, which would provide an overlook of the first major waypoint on our trek to Mount Sharp,” said Jeff Biesiadecki, a rover planner on the Curiosity team at NASA’s Jet Propulsion Laboratory, Pasadena, Calif. “We were able to extend the drive well beyond what we could see by enabling the rover’s onboard hazard avoidance system.”

In the Glenelg area, Curiosity accomplished the mission’s major science goal by finding evidence of an ancient environment favorable for microbial life. The evidence came from analysis of rock powder drilled from two outcrops in a shallow depression called “Yellowknife Bay.” When the rover examines multiple rock layers of Mount Sharp, researchers hope to learn more about ancient habitable environments and major changes in environmental conditions.

“We want to know how the rocks at Yellowknife Bay are related to what we’ll see at Mount Sharp,” said the mission’s project scientist, John Grotzinger of the California Institute of Technology, Pasadena. “That’s what we intend to get from the waypoints between them. We’ll use them to stitch together a timeline — which layers are older, which are younger.”

The science team is using images taken from Panorama Point to select precisely where to pause for a few days and use instruments on Curiosity’s arm to examine Waypoint 1. The rock targets being considered are still about 245 feet (75 meters) southwest of Curiosity’s Sept. 9 position.

The trek to Mount Sharp will continue for many months after the planned work at Waypoint 1.