ANN ARBOR, Mich. — To watch a magician transform a vase of flowers into a rabbit, it’s best to have a front-row seat. Likewise, for chemical transformations in solution, the best view belongs to the molecular spectators closest to the action.

Those special molecules comprise the “first solvation shell,” and although it has been known for decades that they can sense and dictate the fate of nearly every chemical reaction, it has been virtually impossible to watch them respond. University of Michigan researchers Kevin Kubarych and Carlos Baiz, however, recently achieved the feat. Their work was published online Aug. 25 in the Journal of the American Chemical Society.

Until now, observing the solvent shell in action has been difficult for several reasons. First, fundamental steps in chemical reactions are exceedingly fast. To “film” a chemical reaction requires a camera with a “shutter speed” of femtoseconds (one femtosecond is the time it takes light to travel the length of a bacterium—about half a micrometer, or one hundredth the width of a human hair).

Second, a solution contains many solvent molecules, but only a few are privileged to be in the first solvation shell and participate in the reaction. Finally, most spectroscopic probes of liquids are not chemically specific, meaning they can’t identify the particular molecular species they are monitoring. 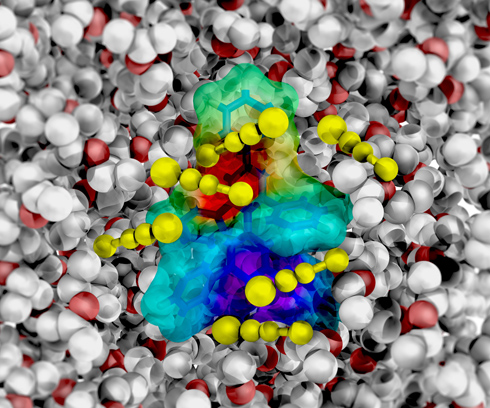 About the image: The molecules shown here in yellow are first-hand observers to an ultrafast chemical reaction. As the reaction proceeds, the vibrational frequencies of the yellow molecules change. By “listening” to changes in these vibrational frequencies, researchers Kevin Kubarych and Carlos Baiz could observe the chemical reaction underway. The rainbow colors indicate how the “notes” of the yellow molecules change in response to the reaction. Image credit: Kevin Kubarych and Carlos Baiz

To sum up, watching the first solvation shell respond to a chemical reaction requires a combination of ultrafast time resolution and the ability to initiate the reaction and track the solvent shell’s response. It is this combination that Kubarych, an assistant professor of chemistry, and graduate student Baiz have achieved.

The key breakthrough was to realize that electrons move during chemical reactions and that when the nearest solvent molecules sense the electron redistribution, their vibrational frequencies change. Much as the strings on a musical instrument are intimately connected to the wooden neck and body, the solvent shell and the reacting molecule are tightly coupled and difficult to disentangle. Indeed, the very act of holding an instrument may cause it to warp or heat up and, in principle, these changes affect the frequencies of vibration of the strings. Similarly, the new approach to reaction dynamics introduced by Kubarych’s lab essentially “listens” to the very fastest events in chemical reactions by noting the changing resonance frequencies of the surrounding molecules.

“This level of detailed information on the complex environments common in chemical transformations is unique,” Kubarych said, “and promises to offer remarkable insight into the understanding of natural and artificial charge transfer reactions—processes that are of fundamental importance in contexts ranging from cellular respiration to solar energy conversion.”

The research was supported by the National Science Foundation and the U-M Rackham Graduate School.