Free as a Bird?

COLUMBIA, Mo. – It may seem like birds have the freedom to fly wherever they like, but researchers at the University of Missouri have shown that what’s on the ground has a great effect on where a bird flies. This information could be used by foresters and urban planners to improve bird habitats that would help maintain strong bird populations.

“Movement of individuals influences nearly every aspect of biology, from the existence of a single population to interactions within and among species,” said Dylan Kesler, assistant professor in fisheries and wildlife at the University of Missouri’s School of Natural Resources. “Movement determines where individual birds procreate. How they spread across the landscape affects who meets whom, which in turn dictates how genes are spread.”

Kesler has found that non-migrating resident birds tend to travel over forest “corridors,” which are areas protected by trees and used by wildlife to travel. Birds choose to travel over forests because they can make an easier escape from predators as well as find food. Man-made features such as roads, as well as gaps forests from agriculture or rivers, can restrict birds to certain areas. When forests are removed, bird populations become isolated and disconnected, which can lead to inbreeding and weaker, more disease-prone birds. 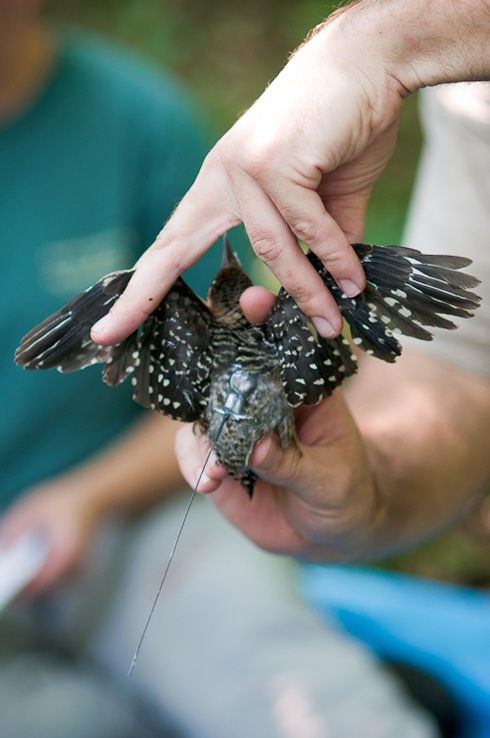 About the image: MU researchers attach a transmitter to the back of a juvenile red-bellied woodpecker to track its movements. Image credit: University of Missouri

Earlier this summer, Kesler and MU graduate student Allison Cox tagged 33 juvenile red-bellied woodpeckers in Missouri’s Mark Twain National Forest. Kesler chose to study the red-bellied woodpecker because the bird lives in the same area year-round and is very loyal to specific sites. The tags used by the researchers enable their team to track the birds’ daily flights using radiotelemetry and GPS technology. The tags are designed to fall off the birds after four months. The summer and fall months are important because this is when young birds are most active, establishing territories and finding mates, studies say.

The research team also hopes to discover more about natal dispersal, the time interval between when a bird moves from where it is hatched to an area where it will breed. Very little is known about what influences natal dispersal.

“In many territorial resident birds, natal dispersal is the only time an individual bird makes a substantial movement from one location to another,” Kesler said. “Natal dispersal is, therefore, integral to gene flow among populations, colonizing vacant habitat, inbreeding avoidance and maintaining optimal population densities.”

This year’s work builds upon research Kesler has been conducting since 2005 on three species of woodpeckers and two Pacific island kingfishers. The study is funded by a University of Missouri program to encourage new faculty. Results will be published this fall in conservation-oriented science journals. Results from Kesler’s previous research about dispersal appeared in the nation’s top ornithological journal, The Auk, and another paper will soon be published in Behavioral Ecology.