*A new space telescope designed to peer into the inner reaches of far-away solar systems and a balloon riding the jet stream 120,000 feet above ground are two UA research proposals selected by NASA for further evaluation as potential future science missions.*

A research balloon circling the Earth in the outer fringes of the atmosphere and a space telescope peering through the dust swirls of far-away solar systems in search of alien planets are among the winning proposals selected by NASA for further study as part of NASA’s Explorer Mission program.

Both project proposals, called EXCEDE and GUSSTO, are led by astronomers at the University of Arizona’s Steward Observatory and are among 11 selected by NASA for evaluation as potential future science missions.

EXCEDE stands for Exoplanetary Circumstellar Environments and Disk Explorer. NASA selected the proposal to proceed with a $600,000 award to advance the technology readiness level of instrumentation proposed to be used in the space environment. Mission costs are capped at $200 million each, excluding the launch vehicle. 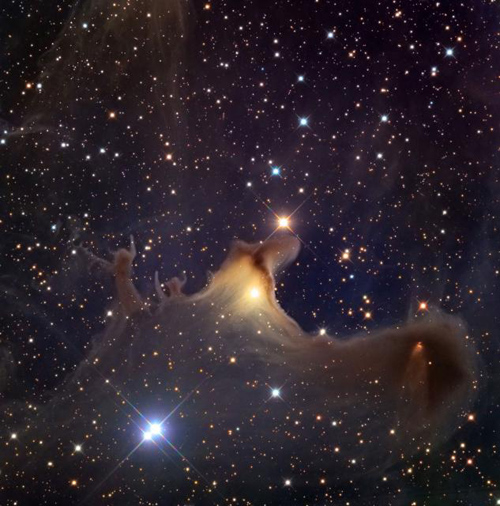 Star formation shapes the gas and dust clouds that waft through the vast expanses of space. In the spirit of Halloween, this image of dark nebula SH2-136 can be looked at as showing a ghost-like creature chasing humans. The GUSSTO mission proposal consists of an infrared telescope mounted on a balloon, to rise above the atmosphere's water vapor obscuring the view into interstellar gas and dust clouds. Image credit: Adam Block/UA SkyCenter

If selected, the EXCEDE satellite would orbit the Earth at an altitude of 2,000 kilometers (1,243 miles) and observe the circumstellar disks of about 350 nearby exoplanetary systems. Using sophisticated optics developed at the UA, the telescope will deliver the first direct images of extrasolar planets in the inner reaches of solar systems similar to our own, a feat that has been difficult to achieve because planets orbiting their star at close range are difficult to detect because of the star’s overwhelming brightness.

One of the areas EXCEDE will focus on is the so-called habitable zone, that is the region where Earth-like planets may be found in other solar systems.

“Circumstellar disks consist of dust that is left over from planet formation or regenerated by planet collisions,” said Rieke, one of the co-investigators on the proposal, “so in a way they are signposts for where planets ran into each other.”

According to Rieke, our own solar system, too, contains the scattered remains of a circumstellar disk, the so-called Zodiacal Light, which is located between Mars and Jupiter and visible as a faint glow of the sky at sundown.

The second proposal also envisions lifting a telescope off the ground, albeit to lower heights than EXCEDE. Dubbed GUSSTO, this mission would launch a high altitude balloon with a 1-meter telescope to provide a comprehensive understanding of the inner workings of our Milky Way galaxy and one of our galaxy’s companion galaxies, the Large Magellanic Cloud.

GUSSTO, which stands for Gal/Xgal U/LDB  Spectroscopic/Stratospheric THz Observatory, is one of five proposals selected from a pool of 20 applications for a NASA Explorer Mission of Opportunity and received $250,000 to conduct an 11-month implementation concept study. These missions are capped $55 million each. The proposals were judged to have the best science value and feasible development plans.

According to Chris Walker, who is an astronomer at the UA’s Steward Observatory and serves as the project’s principal investigator, said little is known about the origin of interstellar clouds of gas and dust.

“That gas and dust is the material that forms stars and planets, and ultimately us,” Walker said. “Some stars blast apart at the end of their life dispersing those materials into the universe again. This mission would help us understand the life cycle of all this gas and dust.”

Circling the Earth at 120,000 feet for up to 100 days, GUSSTO would take advantage of the atmosphere’s extremely low water vapor that is present at those altitudes – about four times as high as commercial airplanes fly – to observe dust and gas clouds in far infrared light.

Unlike space telescopes, GUSSTO’s balloon design makes for a much cheaper platform, allows for heavier payloads and can be retrieved and reused if changes have to be made to the scientific instruments it is carrying.

GUSSTO is a multi-institutional, international project. The co-principal investigator on the mission is Craig Kulesa, who is an assistant astronomer at Steward Observatory.

“We are delighted that NASA elected to support for development studies both of the Explorer proposals submitted from the UA,” said Peter Strittmatter, who heads of the UA’s Steward Observatory and astronomy department. “This is a remarkable achievement and reflects directly the quality of the Steward Observatory-led proposal teams. Both projects have enormous scientific potential and good prospects for moving.”

“NASA continues to seek opportunities to push the cutting edge of science,” said Paul Hertz, chief scientist for NASA’s Science Mission Directorate, Washington. “Innovative proposals like these will help us better understand our solar system and the universe.”

Following the detailed mission concept studies, NASA plans to select up to two of the Explorer Mission proposals and one or more of the five Mission of Opportunity proposals in February 2013. The missions would then proceed toward flight and some could launch by 2016.