‘Library of Fishes’ to Feature Thousands of Specimens from Remote Locations

The stories they could tell, these fishes that once swam the ocean deep and are now in jars and bottles.

In the 1960s and ’70s, Richard Rosenblatt, a marine biologist at California’s Scripps Institution of Oceanography (SIO), set out on field expeditions to remote places to study the fishes of the Pacific Ocean.

During trips south to Mexican waters, Rosenblatt and other scientists retrieved hundreds of specimens of various species.

Most were incorporated into the Scripps Marine Vertebrate Collection (MVC), a fish archive used by scientists around the world.

The collections formed the basis of studies on the systematics of marine fishes by Rosenblatt and others. But due primarily to a lack of space at SIO, much of the treasure trove remained unsorted.

These and more recent collections of fishes now number more than 400 inside containers big and small.

A decade ago, the MVC moved to a new location on the SIO campus, providing the needed space to process the samples. 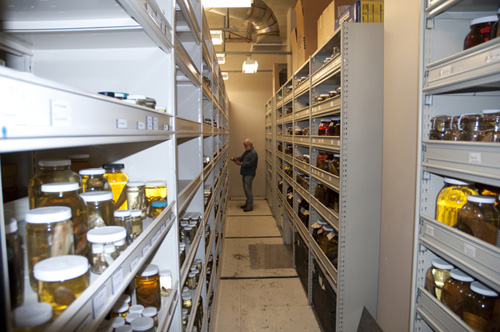 “Each of these containers could include a couple of different species, or dozens in some cases, but from a collection or a scientific perspective, we don’t know what’s in those jars,” said marine biologist Phil Hastings, who took over as curator of the fish collection from Rosenblatt in 1999.

“They potentially provide new data on the diversity, distribution and abundance of fishes throughout the region, but until they are fully processed they are of limited scientific value.”

He’ll soon find out what’s in those jars.

Thanks to an award from the National Science Foundation (NSF), Hastings and colleagues have begun opening the mysterious containers.

“This unique collection from historical and remote locations may hold insights into understanding biodiversity and ecosystem changes in the ocean’s pelagic zone,” said Anne Maglia, program director in NSF’s Division of Biological Infrastructure, which awarded the grant. 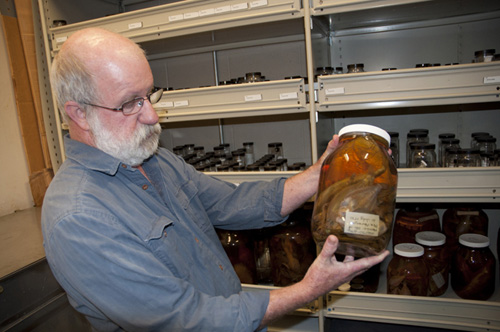 Phil Hastings with specimens to be incorporated into the Scripps collection. Image credit: SIO

A pelagic zone is any water in a sea or lake that is not close to the bottom or near to the shore.

“By rescuing and digitizing these irreplaceable specimens,” Maglia said, “the data they hold will become available to researchers around the world studying systematics, biogeography, and environmental change.”

Scripps graduate student Grant Galland, for example, will use the specimens to further his research on historical changes in fish communities in the Gulf of California.

Galland has conducted field work in many of the same areas as Rosenblatt’s historical expeditions, and will compare how today’s marine environment has changed over the past 40 years or more.

Also through the NSF award, SIO staff members will scan and post in the collection’s online database catalog records and handwritten field notes made at the time specimens were gathered in the wild. 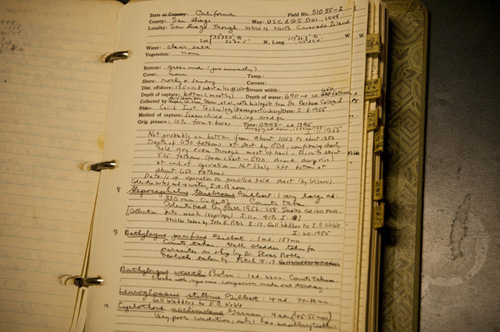 These often provide information about the habitat, environmental conditions at the time of capture, other species observed in the area, and descriptions of freshly caught fishes.

The NSF award also will allow Hastings to archive more than 27,000 fish specimens from remote areas of the ocean.

The specimens, collected by scientists working across 2,000 locations in the eastern tropical Pacific Ocean, were recently acquired as “orphans” from the Southwest Fisheries Science Center, part of NOAA’s National Marine Fisheries Service.

The NSF award also will boost the technological capabilities of the Marine Vertebrate Collection.

A high-tech X-ray machine will generate digital files of specimens to allow fish scientists from near and far to study detailed anatomical features, such as the number of fin rays and vertebrae and details of bone structure of the specimens.

“When [pioneer Scripps ichthyologist] Carl Hubbs made film-based radiographs here at Scripps in the 1950s, he had to wait for the film to be developed to see if the image turned out,” said Hastings. “This new machine gives us that same information in about 30 seconds and at a much higher resolution.”

Students will work on sorting, identifying and cataloguing fishes.

“They’ll be studying not only the taxonomy of fishes,” said Hastings, “but experiencing how a natural history collection works.”

And, on a larger scale, how the ocean itself functions.