An international consortium of scientists has produced the first systematic network map of interactions that occur between proteins in the plant Arabidopsis thaliana. (Arabidopsis is a mustard plant that has 27,000 proteins and serves as a popular model organism for biological studies of plants, analogous to lab rats that serve as popular model organisms for biological studies of animals.)

Known as an “interactome,” the new Arabidopsis network map defines 6,205 protein-to-protein Arabidopsis interactions involving 2,774 individual proteins. By itself, this map doubles the volume of data on protein interactions in plants that is currently available.

The new network map is covered in the July 29th issue of Science. It was produced with partial funding from the National Science Foundation by the so-called “Arabidopsis Interactome Mapping Consortium.” The Consortium has an international membership and is composed of many institutions and researchers. 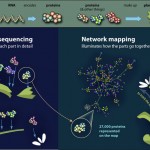 Proteins are essential components of Arabidopsis parts, such as petals, stalks and flowers. The genetics of these essential proteins were previously identified through studies involving genome sequencing. Now, important functional aspects of these previously sequenced proteins, such as interactions between proteins, are described in the July 29th issue of Science. This new information might lay the foundation for future research dedicated to improving important crops. Image credit: Zina Deretsky, National Science Foundation

The production of the Arabidopsis network map was made possible, in part, by the previous production of the genome sequence of Arabidopsis; this sequence is a veritable “parts list” of the plant’s genetic components. But more revealing than the genome sequence, the network map provides insights on the functions of proteins, the compositions of protein communities, and the evolutionary changes of proteins through time, among other things. (See illustration.)

“This starts to give us a big, systems-level picture of how Arabidopsis works, and much of that systems-level picture is going to be relevant to–and guide further research on–other plant species, including those used in human agriculture and even pharmaceuticals,” says Salk Institute biologist Joseph Ecker, a senior member of the Consortium.

About the video: Breaking the Code: Sequencing the Arabidopsis Genome. This video was released in December 2000, when Arabidopsis was first sequenced. Credit: NSF/Dick Young Productions, LTD