A groundbreaking book presents new evidence that challenges the way we understand British and Irish responses to the outbreak of the First World War in 1914.

Almost 100 years since its outbreak, A Kingdom United presents the first ever fully-documented study of British and Irish popular reactions to the outbreak of the First World War. University of Exeter historian Dr Catriona Pennell has explored UK public opinion of the time and successfully challenges the myth of British ‘war enthusiasm’ and Irish disengagement.

Treating the UK as the state that it was in 1914 – the United Kingdom of Britain and Ireland – the research is based on a vast array of contemporary diaries, letters, journals and newspaper accounts from across the country. The book explores what people felt and how they acted in response to an unanticipated and unprecedented crisis. 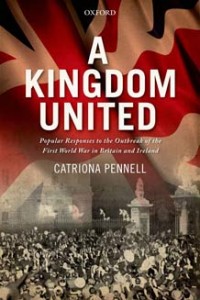 By the end of 1914 people in of England, Scotland, Wales, and Ireland (north and south) had largely embraced the war, but the war had also embraced them and showed no signs of relinquishing its grip. The five months from August to December 1914 set the shape of much that was to follow and Pennell’s research attempts to explain that twenty-week formative process.

No such surveys existed at the time so the book also marks the first-ever comprehensive public opinion survey of the outbreak of the war. It provides a detailed insight in to British and Irish popular reactions that challenges traditional understanding of public feeling at the time.

While historians in France and Germany have dismantled their equivalent myths of war enthusiasm, British and Irish responses to the war have remained largely unexamined. British people are often viewed as enthusiastic and the Irish often characterised as being disengaged.

Dr Pennell says: “Traditional views of public opinion towards the First World War are over simplified and inadequate. A series of retrospective myths have built up that suggest ordinary British and Irish people backed the war because they were deluded, brainwashed and naïvely duped into supporting the conflict. My research shows that this was simply not the case.”

Whilst enthusiastic crowds certainly existed in August 1914, the new research suggests that this didn’t reflect the whole picture. “Other gatherings around late July and early August opposed the war,” Dr Pennell explains, “and many more people were shocked and disbelieving that such an event could happen.”

“Once the decision to go to war was made on 4th August, the public rallied around what was perceived as a just cause. Their support was very often carefully considered, well-informed, reasoned, and only made once all other options were exhausted. People supported the war, but only because they felt it was the right thing to do in light of the circumstances.”

Dr Pennell began her research in 2003 when she started her PhD at Trinity College, Dublin, and has conducted research across the UK and Ireland, as well as in France and the US. She is currently a lecturer in History at the University of Exeter.

A Kingdom United has received favourable reviews in the Times Higher Education (THE), it stated that: ‘Historical myths are notoriously enduring, but that of a British “collective war enthusiasm” at the outbreak of war in 1914 should not survive after this excellent and important book.’

Keith Jeffery for the Times Literary Supplement described the book as,’Drawing on a prodigious range of national, local, communal and private sources, and casting her net widely throughout the whole United Kingdom, Catriona Pennell has provided a marvellously satisfying study of British (and Irish) popular responses to the outbreak of the war.’