Language May Play Important Role in Learning the Meanings of Numbers

New research conducted with deaf people in Nicaragua shows that language may play an important role in learning the meanings of numbers.

Field studies by University of Chicago psychologist Susan Goldin-Meadow and a team of researchers found deaf people in Nicaragua, who had not learned formal sign language, do not have a complete understanding of numbers greater than three.

Researchers surmised the lack of large number comprehension was because the deaf Nicaraguans were not being taught numbers or number words.  Instead they learned to communicate using self-developed gestures called “homesigns,” a language developed in the absence of formal education and exposure to formal sign language. 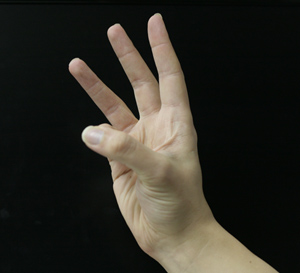 Nicaraguan homesigners surrounded by hearing individuals who deal with large numbers all of the time do not have a complete understanding of numbers greater than three. Researchers conclude this is because they are not being taught numbers or number words. Image credit: Volker Mintzlaff

“The research doesn’t determine which aspects of language are doing the work, but it does suggest that language is an important player in number acquisition,” said Betty Tuller, a program director in the National Science Foundation’s (NSF) Division of Behavioral and Cognitive Sciences, which funded the research.

“The finding may help narrow down the range of experiences that play a role in learning number concepts,” she said.

Research results are reported in the current issue of the Proceedings of the National Academy of Sciences (PNAS) in a paper titled, “Number Without a Language Model.”

While the homesigners do have gestures for number, those gestures are accurately used for only small numbers–numbers less than three–and not for large ones.

By contrast, deaf people who acquire conventional sign languages learn the values of large numbers because they learn a counting routine early in childhood, just as children who acquire spoken languages do.

“It’s not just the vocabulary words that matter, but understanding the relationships that underlie the words–the fact that ‘eight’ is one more than ‘seven’ and one less than ‘nine,'” said Goldin-Meadow. “Without having a set of number words to guide them, the deaf homesigners in the study failed to understand that numbers build on each other in value.”

“What’s most striking is that the homesigners can see that seven fingers are more than six fingers and less than eight fingers, but they are unable to order six, seven and eight fingers,” added Tuller. “In other words, they don’t seem to understand the successor function that underlies number.”

The complexity for homesigners learning seemingly simple concepts such as “seven” may help researchers learn more about the important role language plays in how all children learn early mathematical concepts, especially children who are having trouble learning number concepts in their preschool years.

Scholars previously found that in isolated cultures where the local language does not have large number words, people do not learn the value of large numbers. Two groups of people studied in the Amazon, for instance, do not have words for numbers greater than five. But their culture does not require the use of exact large numbers, which could explain the Amazonians’ difficulty with these numbers.

In Nicaraguan society, however, exact numbers are an important part of everyday life, as Nicaraguans use money for their transactions. Although the deaf homesigners in the University of Chicago study understand the relative value of their money, their understanding is incomplete because they have never been taught number words, said Elizabet Spaepen, the study’s lead author.

“The coins and bills used in Nicaraguan currency vary in size and color according to value, which give clues to their value even if the user has no knowledge of numbers,” Spaepen said. The deaf homesigners could be learning rote information about the currency based on the color and shape of the currency without fully understanding numerical value.

“The findings show that simply living in a numerate culture isn’t enough to develop an understanding of large number,” said Tuller. “This conclusion comes from the observation that the homesigners are surrounded by hearing individuals who deal with large numbers all of the time.

“The findings point toward language since that’s what the homesigners lack,” she said. “In all other respects they are fully functioning members of their community. But that doesn’t mean that there might not be other, nonlinguistic ways of teaching them, or others, the idea of an exact large number.”

The research team is currently working on developing a training procedure to do exactly that–train deaf homesigners the meaning of number using nonlinguistic means.

NSF supports all fields of fundamental science and engineering, except for medical sciences, by funding the research of scientists, engineers and educators directly through their own home institutions, typically universities and colleges.