Of the nearly 1.5 million known animal species on Earth, those with backbones come in a stunning array of shapes and sizes. Vertebrates include fish, amphibians, reptiles, birds and mammals, and the number of species within these groups can vary wildly. For example, there are only six species of lungfish and only 25 crocodilians — but roughly 10,000 birds and 9,700 lizards and snakes.

Surprisingly little is known about how or why differences occur in species numbers among these major vertebrate groups. 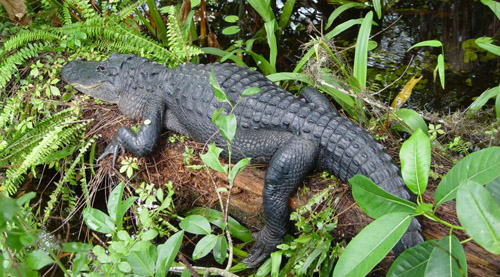 An alligator, part of the order crocodilia, makes its way through a Florida swamp. Only 25 different species of crocodilians exist. (Photo credit: John Wiens)

It turns out that variation in species numbers among these major groups may depend on their habitats. New analyses of vertebrates performed by UA evolutionary biologist John Wiens suggest that the diversification rates of terrestrial groups are much higher than aquatic groups. Habitat is likely to be a more important variable in explaining species richness than other hypothesized explanations, such as climate or metabolic rate, and the importance of habitat may apply to many other types of organisms. The results are published online in the journal Biology Letters.

“I wanted to understand why these different groups vary in species numbers,” said Wiens, a professor in the Department of Ecology and Evolutionary Biology. “I found that most variation in species numbers has a simple explanation: Groups living on land proliferate more rapidly than those in water.” 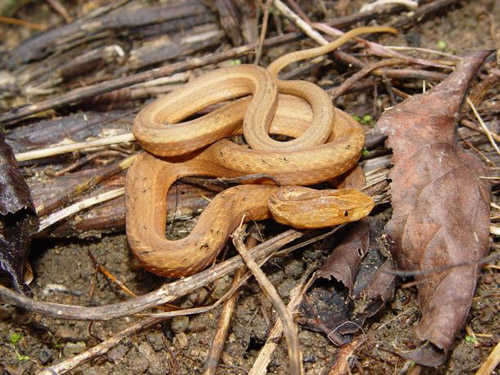 Previous studies have hypothesized a connection between terrestrial habitats and higher rates of diversification, but none had performed a quantitative analysis to test the idea. To address this question, Wiens calculated the net diversification rates for 12 major vertebrate groups. The net diversification rate is similar to the number of species in a group divided by its age. Using this approach, Wiens was able to compare how fast species within each clade were proliferating.

“An example of a clade with a high net diversification rate is birds, which, on a timescale of hundreds of millions of years, are a relatively young group. Since they are both young and have many species, their rate is relatively high,” Wiens explained. “In contrast, sharks and rays have a smaller number of species and they’re a much older group, so they have a lower rate.” 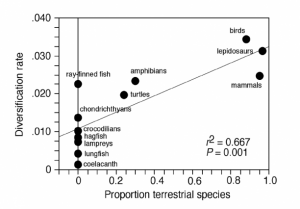 Ray-finned fishes, which make up about 96 percent of fish species and nearly half of all vertebrate species, might appear to be an obvious exception to the high richness of terrestrial groups relative to aquatic groups. However, because ray-finned fishes are more ancient than most other vertebrate groups, their high number of species is to be expected. Therefore, their moderate diversification rates do not really make them an exception to the rule.

“This is where the distinction between species richness and diversification becomes really important. Their age, at least in part, explains why they have such high species richness,” Wiens said. “For a group of fish they’re pretty exceptional, but their diversification rate is underwhelming when compared to terrestrial groups.”

Although the jury is still out on why terrestrial groups proliferate more rapidly than their aquatic cousins, Wiens thinks it could be related to higher rates of extinction in both marine and freshwater environments.

For example, ocean acidification can devastate species of marine organisms. While a land animal similarly faced with a changing environment may have the option of migrating elsewhere, the ocean-dweller can’t escape this sort of global change in marine conditions, which could lead to widespread extinctions. Habitats of freshwater species such as lakes, ponds and rivers are often geographically isolated, restricting species proliferation. Additionally, these habitats can be ephemeral, which can pose challenges to the long-term survival of freshwater species and groups.

Wiens is currently evaluating all animal clades, including invertebrates, to determine if this same pattern is present. If the trend holds, it could help to explain biodiversity patterns throughout the animal kingdom.

“What we’d like to do is try to understand the diversity of life with as few ecological variables as possible,” Wiens said. “We want to be able to describe the natural world with a limited number of organizing principles.”