As the Byzantine Empire was in decline, Islam began to dominate the Middle East, with a remarkable culture that showed a command of technology and an appreciation of art and decoration, research by archaeologists shows.

In order to study Islamic civilization in its earliest days, Donald Whitcomb, who directs the Islamic Archaeology project at the Oriental Institute, is undertaking a project with Palestinian colleagues to further excavate an early Islamic site north of Jericho that contains a palace, a bathhouse and what was probably a settlement to the north.

Whitcomb excavated the site at Khirbet Al-Mafjar last winter and will return in January as part of a joint archaeological project that will include Americans and Palestinians. The team already has uncovered a gate and a stairway that led to a residential town to the north, where the team uncovered an ornamental pool surrounded by white mosaic paving, glass vials, lamps and other artifacts.

The site, also known as Hisham’s Palace (Qasr Hisham) has been excavated since the 1930s, but Whitcomb has challenged some of the conventional wisdom about earlier digs at the site. 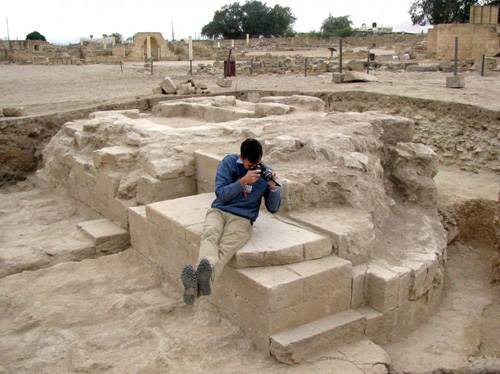 Graduate student Michael Jennings sits on the bench of a gate discovered by a joint Oriental Institute-Palestinian team excavating Khirbet Al-Mafjar, a site near Jericho. Photo by Don Whitcomb

The mosaic, as well as a wonderfully colored floor, is from the rule of caliph Hisham and his nephew caliph Walid, from the period of 724 to 747. Early scholars contended that the palace and bath were only used during that period, but Whitcomb’s careful reading of the artifacts has shown that the site was occupied much longer — possibly as late as 1300.

It was that discovery that helped provide him a chance to join the expedition. “During international meetings in Rome in 2008, the Palestinian director of antiquities, Dr. Hamdan Taha, approached me and exclaimed, ‘Whitcomb, I have proven you correct!’” Taha had done a small excavation that revealed clear evidence of later occupations.

Taha eventually invited Whitcomb to join the project. Whitcomb and graduate student Michael Jennings took along iPads, which became an invaluable tool to record and analyze the artifacts the Americans and Palestinians discovered.

“The joint Palestinian-American project begins a model for research and training,” said Taha. “This will lead to a more precise stratigraphic history of the site and an understanding of the spatial relationship between the palace and the town.”

Gil Stein, director of the Oriental Institute, said the Mafjar project is “highly innovative in pioneering the use of advanced technologies,” such as the iPad to improve the quality, speed and cost-effectiveness of excavations.

“Most archaeologists count on spending 10 hours in the lab for every hour spent digging. Paperless archaeology will not only cut our lab time in half, but it also will allow us to analyze our data so quickly in the field that we can see patterns and adjust the way we excavate almost immediately,” Stein said.

Khirbet al-Mafjar was built in the first dynasty of Islamic rule, in a lush valley watered by abundant springs. Nearby Jericho is 850 feet below sea level and is reputed to be the lowest city in the world — a sub-tropical environment of palms, citrus fruits, bananas and lush vegetation.

The city, which is celebrating 10,000 years of settlement, is an oasis in an otherwise dry terrain. The current city grew up south of an ancient city that has a prominent place in the Bible as the scene of a battle Joshua celebrated in song and legend.

The work of the joint Palestinian-American team will uncover evidence of what kind of trade and agriculture could have sustained Khirbet al-Mafjar and the region around it, which would have included Jericho.

Some of the artifacts uncovered by other teams show that the period at the immediate beginning of Islam had a more tolerant attitude toward images than was later the case. This was also a time of tolerance as Christian and Islamic communities lived side by side.

As has been noted at other early Islamic sites, the taboos against showing images of animals, such as those of the deer in The Tree of Life, was not yet in effect. The bath, which in some ways reflects a Roman style, was decorated with statues of loosely clad women, something later forbidden in Islam.

By finding other examples of the products of technology, trade and agriculture, the team will better be able to explain the culture that was the foundation for Islamic civilization.