Jekyll and Hyde Bacteria Aids or Kills, Depending on Chance

EAST LANSING, Mich. — Living in the guts of worms are seemingly innocuous bacteria that contribute to their survival. With a flip of a switch, however, these same bacteria transform from harmless microbes into deadly insecticides.

In the current issue of Science, Michigan State University researchers led a study that revealed how a bacteria flips a DNA switch to go from an upstanding community member in the gut microbiome to deadly killer in insect blood.

Todd Ciche, assistant professor of microbiology and molecular genetics, has seen variants like this emerge sometimes by chance resulting in drastically different properties, such as being lethal to the host or existing in a state of mutual harmony. Even though human guts are more complex and these interactions are harder to detect, the revelation certainly offers new insight that could lead to medical breakthroughs, he said. 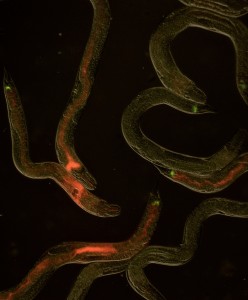 Jekyll and Hyde bacteria live and thrive in the guts of worms. Photo courtesy of Alex Martin.

“Animal guts are similar to ours, in that they are both teeming with microbes,” said Ciche, who worked with researchers from Harvard Medical School. “These bacteria and other microorganisms are different inside their hosts than isolated in a lab, and we’re only beginning to learn how these alliances with microbes are established, how they function and how they evolve.”

The bacteria in question are bioluminescent insect pathogens. In their mutualistic state, they reside in the intestines of worms, growing slowly and performing other functions that aid nematode’s survival, even contributing to reproduction.

As the nematodes grow, the bacteria reveal their dark side. They flip a DNA switch and arm themselves by growing rapidly and producing deadly toxins. When the worms begin infesting insects, they release their bacterial insecticide.

“It’s like fleas teaming up with the plague,” Ciche said.

The question remains: What causes this dramatic transformation?

“If we can figure out why the DNA turns on and off to cause the switch between Jekyll and Hyde, we can better understand how bacteria enter stages of dormancy and antibiotic tolerance – processes critical to treating chronic infections,” Ciche said.