Japan’s recent magnitude 9.0 earthquake, which triggered a devastating tsunami, relieved stress along part of the quake fault but also has contributed to the build up of stress in other areas, putting some of the country at risk for up to years of sizeable aftershocks and perhaps new main shocks, scientists say.

After studying data from Japan’s extensive seismic network, researchers from the Woods Hole Oceanographic Institution (WHOI), Kyoto University and the U.S. Geological Survey (USGS) have identified several areas at risk from the quake, Japan’s largest ever, which already has triggered a large number of aftershocks.

Data from the magnitude 9.0 Tohoku earthquake on March 11 has brought scientists a small but perceptible step closer to a better assessment of future seismic risk in specific regions, said Shinji Toda of Kyoto University, a lead author of the study. “Even though we cannot forecast precisely, we can explain the mechanisms involved in such quakes to the public,” he said. Still, he added, the findings do bring scientists “a little bit closer” to being able to forecast aftershocks.

“Research over the past two decades has shown that earthquakes interact in ways never before imagined,” Toda, Jian Lin of WHOI and Ross S. Stein of USGS write in a summary of their paper in press for publication in the Tohoku Earthquake Special Issue of the journal Earth, Planets and Space. “A major shock does relieve stress—and thus the likelihood of a second major tremor—but only in some areas.  The probability of a succeeding earthquake adjacent to the section of the fault that ruptured or on a nearby but different fault can jump” significantly. 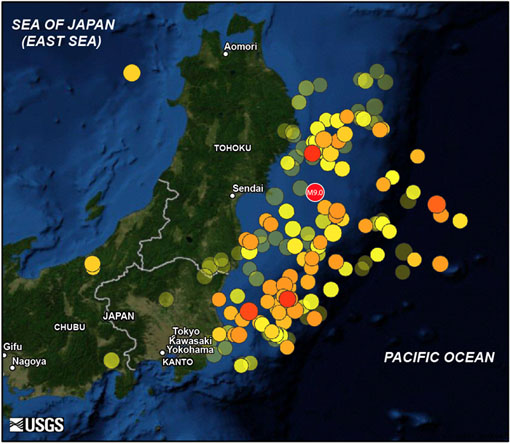 The Tohoku earthquake, centered off northern Honshu Island, provided an “unprecedented” opportunity to utilize Japan’s “superb monitoring networks” to gather data on the quake, the scientists said. The Tohoku quake, the fourth largest earthquake ever recorded, was “the best-recorded [large quake] the world has ever known.”

This made the quake a “special” one in terms of scientific investigation, Lin said. “We felt we might be able to find something we didn’t see before” in previous quakes, he said.

The magnitude 9 quake appears to have influenced large portions of Honshu Island, Toda said. At particular risk, he said, are the Tokyo area, Mount Fuji and central Honshu including Nagano.

The Kantu fragment, which is close to Tokyo, also experienced an increase in stress. Previous government estimates have put Tokyo at a 70 percent risk for a magnitude 7 earthquake over the next 30 years. The new data from the Tohoku quake increase those odds to “more than 70 percent,” Toda said. “That is really high.”

Using a model known as Coulomb stress triggering, Lin and his colleagues found measureable increases in stress along faults to the north at Sanriku-Hokobu, south at Off Boso and at the Outer Trench Slope normal faults east of the quake’s epicenter off the Japan coast near the city of Sendai.

“Based on our other studies, these stress increases are large enough to increase the likelihood of triggering significant aftershocks or subsequent mainshocks,” the researchers said.

Stein of the USGS emphasized the ongoing risk to parts of Japan. “There remains a lot of real estate in Japan–on shore and off–that could host large, late aftershocks of the Tohoku quake,” he said.

“In addition to the megathrust surface to the north or south of the March 11 rupture, we calculate that several fault systems closer to Tokyo have been brought closer to failure, and some of these have lit up in small earthquakes since March 11. So, in our judgment, Central Japan, and Tokyo in particular, is headed for a long vigil that will not end anytime soon.”

Lin added that aftershocks, as well as new mainshocks, could continue for “weeks, months, years.”

Toda explained that the magnitude of future quakes is proportional to the length of the fault involved.

In a separate paper submitted to Geophysical Research Letters, the researchers “report on a broad and unprecedented increase in seismicity rate for microearthquakes over a broad (360 by 120 mile) area across inland Japan, parts of the Japan Sea and the Izu islands, following the 9.0 Tohoku mainshock.”

“The crust on the land was turned on…far away from a fault,” Lin said. Most of these are relatively small quakes—magnitude 2 to 4—“but a lot of them,” Lin said. “This is surprising; we’ve never seen this before,” he said. “Such small events…may have happened following major quakes in other places but may have been missed due to poor seismic networks.”

“The 9.0 Tohoku quake caught many people including scientists by surprise,” Lin said. “It had been thought that a large quake in this area would go up to about 8.2, not 9.0” That estimate was significantly influenced by historical data. “The Tohoku quake reminded us that considering only the historical earthquakes is inadequate, even in a country of relatively long written records like Japan and China,” he said.

“Historical records, and especially the instrumental records, are indeed too short to provide a full picture of the potential of large earthquakes in a region. Thus we must encourage many more studies to find geological evidence (for example, through analyzing sediment cores extracted on land and undersea) that might provide clues of large earthquake and tsunami events that occurred hundreds to thousands of years ago.”

“We must recognize that because our knowledge is incomplete, our estimation of seismic hazard is likely to be underestimated in many cases. Thus we must prepare for potential hazard that might be worse than we already know,” Lin said.

The finding that a quake such as this one can increase stresses elsewhere “means that new quakes could occur in the region,” Lin said. “We must factor in this new information on stresses into earthquake preparedness.”