The Abolitionists, airing on PBS this month, is timed to coincide with the 150th anniversary of the Emancipation Proclamation, but it offers viewers “a real understanding of the complexities of what it took to end slavery” beyond Lincoln’s proclamation itself, a University of Delaware historian featured in the series says.

Erica Armstrong Dunbar, associate professor of history with joint appointments in Black American Studies and in women and gender studies, was approached by creators of the three-part series to provide her perspective on the issues and individuals featured. The Abolitionists is part of the “American Experience” series and is scheduled to air Tuesday nights, Jan. 8, 15 and 22.

The presentation focuses on five individuals — male and female, black and white — who fought passionately and in the face of danger to themselves to end slavery. It tells their stories through a mix of drama and documentary, interspersed with interviews with Armstrong Dunbar and other noted historians.

“This film helps us think about the long process that preceded the Emancipation Proclamation and about the people who put their lives on the line every day by speaking out against slavery,” Armstrong Dunbar said. “It’s a very nuanced view of the way abolitionists went from being considered a fringe group to becoming a force to be reckoned with.” 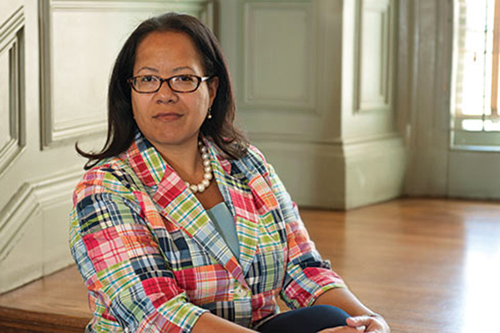 The Abolitionists focuses on five individuals — Frederick Douglass, William Lloyd Garrison, Angelina Grimke, Harriet Beecher Stowe and John Brown — and tells their intertwined stories. It covers some of the most violent decades in American history, from the 1820s through the signing of the Emancipation Proclamation on New Year’s Day 1863 and the ratification of the 13th Amendment, banning slavery in all states, in December 1865.

Armstrong Dunbar was contacted by the filmmakers in 2011 and was interviewed on camera that fall. She hasn’t seen the final production but said she was impressed by the way the interviewers gave her the opportunity to talk about the complexities of the hard-fought abolitionist movement.

“Most of my involvement was in speaking about Frederick Douglass, who in many ways stands as a unique example of the black abolitionist,” she said. “He represents the idea that abolition was taken by the actions of very brave and passionate people — not just given” by Lincoln’s proclamation.

Abolitionists often disagreed with one another about strategy, she said, and those who opposed slavery were not necessarily in favor of civil rights for African Americans. PBS avoided oversimplifying the issue and “really sets it right by focusing on someone like Frederick Douglass and the tens of thousands of other c,” she said.

A clip from the show can be viewed at this website.

Armstrong Dunbar, a specialist in 19th century African American and women’s history, is the author of A Fragile Freedom: African American Women and Emancipation in the Antebellum City and is the first director of the Program in African American History at the Library Company of Philadelphia. Her newest book project is Never Caught: The Life of Oney Judge Staines.