It could also work for Mars

Bits of plant life encapsulated in molten glass by asteroid and comet impacts millions of years ago give geologists information about climate and life forms on the ancient Earth. Scientists exploring large fields of impact glass in Argentina suggest that what happened on Earth might well have happened on Mars millions of years ago. Martian impact glass could hold traces of organic compounds.

PROVIDENCE, R.I. [Brown University] — Asteroid and comet impacts can cause widespread ecological havoc, killing off plants and animals on regional or even global scales. But new research from Brown University shows that impacts can also preserve the signatures of ancient life at the time of an impact. 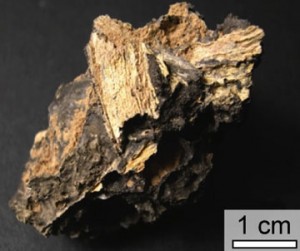 A snapshot of ancient environmental conditions. The scorching heat produced by asteroid or comet impacts can melt tons of soil and rock, some of which forms glass as it cools. Some of that glass preserves bits of ancient plant material. Image credit: Brown University

A research team led by Brown geologist Pete Schultz has found fragments of leaves and preserved organic compounds lodged inside glass created by a several ancient impacts in Argentina. The material could provide a snapshot of environmental conditions at the time of those impacts. The find also suggests that impact glasses could be a good place to look for signs of ancient life on Mars.

The work is published in the latest issue of Geology Magazine.

The scorching heat produced by asteroid or comet impacts can melt tons of soil and rock, some of which forms glass as it cools. The soil of eastern Argentina, south of Buenos Aires, is rife with impact glass created by at least seven different impacts that occurred between 6,000 and 9 million years ago, according to Schultz. One of those impacts, dated to around 3 million years ago, coincides with the disappearance of 35 animal genera, as reported in the journal Science a few years back.

“We know these were major impacts because of the shocked minerals trapped inside with plant materials,” Schultz said. “These glasses are present in different layers of sediment throughout an area about the size of Texas.”

Within glass associated with two of those impacts — one from 3 million years ago and one from 9 million years ago — Schultz and his colleagues found exquisitely preserved plant matter. “These glasses preserve plant morphology from macro features all the way down to the micron scale,” Schultz said. “It’s really remarkable.”

Chemical analysis of the samples also revealed the presence of organic hydrocarbons, the chemical signatures of living matter.

To understand how these structures and compounds could have been preserved, Schultz and his colleagues tried to replicate that preservation in the lab. They mixed pulverized impact glass with fragments of pampas grass leaves and heated the mixture at various temperatures for various amounts of time. The experiments showed that plant material was preserved when the samples were quickly heated to above 1,500 degrees Celsius.

It appears, Schultz says, that water in the exterior layers of the leaves insulates the inside layers, allowing them to stay intact. “The outside of the leaves takes it for the interior,” he said. “It’s a little like deep frying. The outside fries up quickly but the inside takes much longer to cook.”

If impact glass can preserve the signatures of life on Earth, it stands to reason that it could do the same on Mars, Schultz says. And the soil conditions in Argentina that contributed to the preservation of samples in this study are not unlike soils found on Mars.

The Pampas region of Argentina is covered with thick layers of windblown sediment called loess. Schultz believes that when an object impacts this sediment, globs of melted material roll out from the edge of the impact area like molten snowballs. As they roll, they collect material from the ground and cool quickly — the dynamics that the lab experiments showed were important for preservation. After the impact, those glasses are slowly covered over as dust continues to accumulate. That helps to preserve both the glasses and the stowaways within them for long periods — in the Argentine case, for millions of years.

Much of the surface of Mars is covered in a loess-like dust, and the same mechanism that preserved the Argentine samples could also work on Mars.

“Impact glass may be where the 4 billion-year-old signs of life are hiding,” Schultz said. “On Mars they’re probably not going to come out screaming in the form of a plant, but we may find traces of organic compounds, which would be really exciting.”