Is There Really a Giant Island of Plastic in the Pacific Ocean?

Make no mistake about it: plastic waste is a huge problem and one that has been posing a very serious threat to our oceans for decades. What’s worse is that there hasn’t been any real strides made into solving the problem; while recycling and better waste disposal are on the up, so is our rate of plastic consumption. Around the world, we still only recycle around 1% of our unwanted plastic – an alarming amount of the remained ends up in landfill, and a depressing 10% of it ends up in the world’s oceans.

It’s a problem which was highlighted in a scientific white paper that surfaced around 1988, in which ecologists predicted a giant patch of plastic garbage probably existed somewhere in the North Pacific. These predictions didn’t create much fanfare until nearly a decade later, when Charles Moore – a racing boat captain and founder of the Algalita Marine Research Foundation – came across a shocking find while taking an unconventional route during a sailing race. Moore describes the scene:

“As I gazed from the deck at the surface of what ought to have been a pristine ocean, I was confronted, as far as the eye could see, with the sight of plastic. It seemed unbelievable, but I never found a clear spot. In the week it took to cross the subtropical high, no matter what time of day I looked, plastic debris was floating everywhere: bottles, bottle caps, wrappers, fragments…” 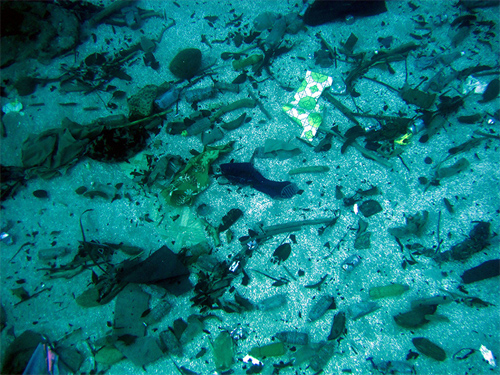 It is an emotive piece of prose, and immediately caught attention of the press. With this single discovery, the world was finally waking up to the realization that our unwanted plastic did not simply disappear – it had been collecting en masse in our oceans, pushed and consolidated by gulf streams into huge islands of debris.

But pictures, as they say, are worth a thousand words. The press were keen to find shocking images of these floating garbage pools, and pretty soon they had one. This image has been widely circulated and has become an almost iconic picture of the Great Pacific Garbage Patch, as it is commonly dubbed: 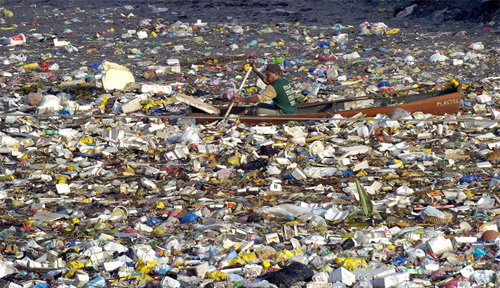 The only thing is, this isn’t in the Pacific Ocean… or any other ocean, for that matter.

In fact, no such plastic island exists in the Pacific.

Or, at least, not in the way people assume.

Firstly, it’s important to note that the above shot was taken within Manila Bay in the Philippines. The image hit viral popularity before anyone could even point out that there is no logical reason for a single-manned canoe to be in the middle of an ocean like this.

Secondly, Captain Moore’s description of what he found during his sail race has been a double-edged sword. On the one hand, its hyperbolic language has stirred people to action. On the other, it is a little exaggerated – Moore’s finding wouldn’t have looked as dramatic as the Manila image, and we are relatively certain that the huge islands of solid plastic waste which have captured the public’s imagination are a myth.

None of this, however, mitigates the fact that the reality is even more disturbing.

While we traditionally see items like plastic bottles and bags as indestructible if left out in nature, they do in fact break down in ocean water… but only so much.

Nearly all of the plastic in our oceans is at a miniscule level – tiny shreds at the largest, ranging down to the microscopic. And there is a lot of it; our best estimates so far indicate that there are nearly 400,000 particles of plastic pollution per square kilometer of ocean water (in the areas where it accumulates the most). In addition to the particle-sized pieces, there are around 13,000 visible pieces of plastic litter floating on top of it.

These are hard numbers to visualize in and of themselves, and lack the shock value of the aforementioned plastic islands. Ecologists are even having difficulty measuring the exact volume of plastic in these ‘garbage patch’ regions, given the complexities of measuring invisible substances over a range of depths.

One answer nearly all experiments are pointing to? Plastic waste is starting to become more plentiful than the biomass.

Pictured above, there are five regions like this – called gyres – around the globe, and they’re all growing at an alarming rate. The biggest of which (in the North Pacific) has a surface area roughly the same as Texas.

Plastic Islands? If Only

This is an even worse scenario than monstrous islands of plastic most people imagine. We cannot remove plastic from a 700,000 square kilometer patch of ocean at a magnitude of half a million pieces per square kilometer, especially when each piece is no larger than your thumbnail. Separating these plastics from the plankton and other bio-organisms they damage is virtually impossible – if it were a simple island made of discarded Coca-Cola bottles, we’d have a relatively easy job on our hands.

Couple this with the fact that no country wants to take ownership of the problem (a symptom of these polymer soups forming in the center of oceans), and it’s clear that the only way to stop these garbage patches from growing is to eliminate plastic waste entering into the ocean in the first place.

*Author’s Bio: “Zeke A. Iddon is a British entertainer and advocate of improving global thinking on climate change and sustainability issues. In his capacity as a writer for Poly2Petro, he hopes to help educate the public’s understanding of plastic recycling (and its current failures), if only in a small way.”

To learn more about what Poly2Petro aims to do in pursuit of this – as well as to solve other environmental and consumption problems at the same time – see this page on ‘Our Solution’.