Researchers from North Carolina State University, the Oak Ridge National Laboratory and CFD Research Corporation have found a new way to develop straight carbon nanofibers on a transparent substrate. Growing such nanofiber coatings is important for use in novel biomedical research tools, solar cells, water repellent coatings and others. The technique utilizes a charged chromium grid, and relies on ions to ensure the nanofibers are straight, rather than curling – which limits their utility.

“This is the first time, that I know of, where someone has been able to grow straight carbon nanofibers on a clear substrate,” says Dr. Anatoli Melechko, an associate professor of materials science and engineering at NC State and co-author of a paper describing the research. “Such nanofibers can be used as gene-delivery tools. And a transparent substrate allows researchers to see how the nanofibers interact with cells, and to manipulate this interaction.”

Specifically, the nanofibers can be coated with genetic material and then inserted into the nucleus of a cell – for example, to facilitate gene therapy research. The transparent substrate improves visibility because researchers can shine light through it, creating better contrast and making it easier to see what’s going on.

The researchers also learned that ions play a key role in ensuring that the carbon nanofibers are straight. To understand that role, you need to know how the technique works. 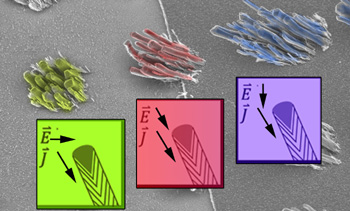 The nanofibers lean in different directions depending on where they are located in relation to the chromium grid, because the ions are being drawn to the grid and strike the catalysts at various angles. Image credit: North Carolina State University

The nanofibers are made by distributing nickel nanoparticles evenly on a substrate made of fused silicon (which is pure silicon dioxide). The substrate is then overlaid with a fine grid made of chromium, which serves as an electrode. The substrate and grid are then placed in a chamber at 700 degrees Celsius, which is then filled with acetylene and ammonia gas. The chrome grid is a negatively charged electrode, and the top of the chamber contains a positively charged electrode.

Meanwhile, the nickel nanoparticles are serving as catalysts, reacting with the carbon in the acetylene gas (C2H2) to create graphitic carbon nanofibers. The catalyst rides on the tip of  the nanofiber that forms beneath it, like a rapidly growing pillar. The term graphitic means that the nanofibers have carbon atoms arranged in a hexagonal structure – like graphite.

One problem with growing carbon nanofibers is that the surface of the catalyst can become obstructed by a carbon film that blocks catalytic action, preventing further nanofibers growth. Here’s where those ions come in.

The ions being drawn to the chromium grid are moving very quickly, and they choose the shortest possible route to reach the negatively-charged metal. In their rush to reach the grid, the ions often collide with the nickel catalysts, knocking off the excess carbon – and allowing further nanofibers growth. Video of the process is available here.

Because the ions are being drawn to the chromium grid, the angle at which they strike the catalysts depends on where the catalyst is located relative to the grid. For example, if you are looking down at the grid, a catalyst just to the right of the grid will appear to be leaning right – because ions would have been striking the right side of the catalyst in an attempt to reach the grid. These nanofibers are still straight – they don’t curl up – they simply lean in one direction. The bulk of the nanofibers, however, are both straight and vertically aligned.

“This finding gives us an opportunity to create new reactors for creating nanofibers, building in the chromium grid,” Melechko says.

The paper, “Role of ion flux on alignment of carbon nanofibers synthesized by DC plasma on transparent insulating substrates,” is forthcoming from the ACS journal Applied Materials & Interfaces. The paper was co-authored by Ryan Pearce, a Ph.D. student at NC State; Dr. Alexei Vasenkov of CFDRC; and Dale Hensley, Dr. Michael Simpson and Timothy McKnight of Oak Ridge National Laboratory. The research was supported by Materials Sciences and Engineering Division, Office of Basic Energy Sciences, U.S. Department of Energy (processing, analytical microscopy, and experimental design). The device fabrication for cell interfacing was done through a user project at the Center for Nanophase Materials Sciences, Oak Ridge National Laboratory, and sponsored by the Scientific User Facilities Division, Office of Basic Energy Sciences, U.S. Department of Energy.

NC State’s Department of Materials Science and Engineering is part of the university’s College of Engineering.