Invasion in the Desert: Why Some Plant Species are Survivors

Max Li, a University of Arizona doctoral student in the Department of Ecology and Evolutionary Biology, is studying mechanisms that determine how competing desert plants can coexist with each other and what factors can cause the destruction of this stable coexistence.

His research could help inform policies to curb the spread of invasive species.

“I have been lucky enough to get three dry years in a row,” said Li, expressing a sentiment probably shared by few in Southern Arizona. But if you’re a field ecologist studying how desert species adapt, persist and compete with each other in dry environments, then the lack of rain in recent years means the perfect conditions for a field experiment.

“My question is: Why do some exotic species become invasive and why are some able to coexist naturally with native plants?” Li said.

“In theory, we can explain coexistence in terms of environmental fluctuation. Using a mathematical derivation we have several ideas of distinctive mechanisms that can promote coexistence.” 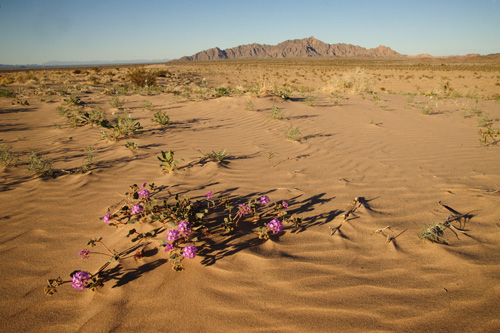 Less than one inch of winter rainfall does not deter a bloom of wild sand verbena upon the Mohawk Dune. (Image courtesy of Max Li)

According to his adviser Peter Chesson‘s theory, Li said, where competing species can stably coexist and where they drive each other to extinction is determined by three coexistence mechanisms that affect how the species relate to each other across space and time under changing environments.

“Environmental fluctuation is prevalent in nature,” Li said. “Therefore it is critical to consider how organisms respond to this fluctuation to achieve a dynamic balance.”

“It’s like in the stock market. If you always buy at the highest price and sell at the lowest price then you don’t have stability, you lose money. But if you know how to make gain at the right price and try to diminish your loss in a bearish market, you can make a profit,” Li said.

“So that’s exactly what organisms do because organisms have evolved where there is huge variation in the environment over a long time or over a large space, so those who cannot take advantage of this variation probably won’t do very well.” 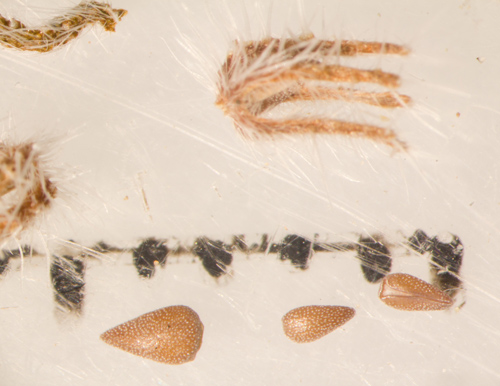 Li is focusing on two of the coexistence mechanisms that are theorized to be the most effective, termed “storage effect,” which refers to the fact that gain in population growth under good conditions can be stored even when species experience bad conditions, and “fitness-density covariance,” which refers to how well species can build up population in their favorable habitat.

For the first time, Li’s experiments are testing these mechanisms in the field, surveying a number of native desert plants and one invasive species, the Sahara mustard.

“The strength of the mechanisms are measured in fitness, so we measure parameters that indicate the fitness of plants,” Li explained. “For example, we can measure the number of seeds that the plant will produce or the mass of the plant.” 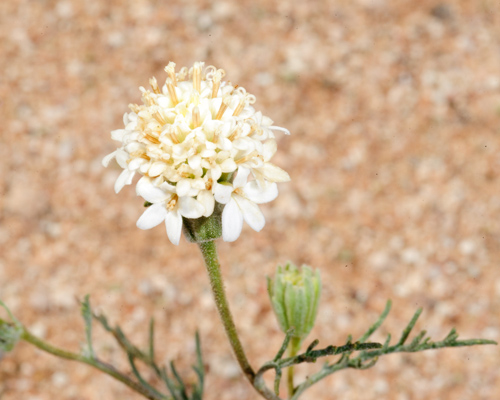 Blooming Chaenactis stevioides, one of the desert native species on which Li focuses his research. (Image courtesy of Max Li)

Li has divided his study site into segments that represent different scales of an ecological community, from neighborhoods of just a few plants living closely together and competing directly with one another for resources like nutrients and water, to habitats, including sand dunes and a sand flat.

“The sand dunes have very unstable soil because in a dune the sand shifts all the time. There are very few large perennial plants living there just because the soil is so dynamic,” Li said. Whereas in the sand flat, he said, “the soil is still sandy but it’s much more stable and there are large shrubs.”

In theory, the population variation among plant species at the smaller scales, such as among neighborhoods or between the habitats, can contribute to the stability of the overall system, Li said.

“The theory predicts that population fluctuations due to environmental variation at lower scales, such as neighborhoods of plants, can give rise to these mechanisms to promote coexistence at higher scales, such as across a landscape,” he said.

“There are huge implications for conservation. We can encourage the conditions that promote coexistence and try to prevent these conditions from disappearing.” 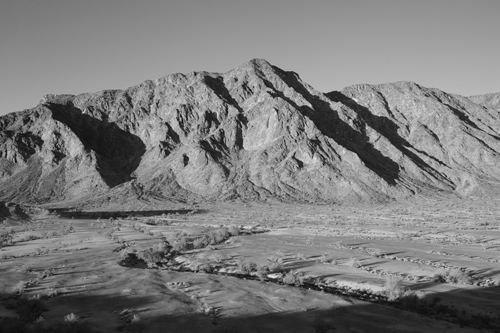 Li’s field site lies in the Mohawk Valley of southern Arizona, at the feet of the majestic mountains for which it was named. (Image courtesy of Max Li)

Understanding the ecological process that could give native species an edge over invasive species could help people to better implement practices to curb the invasion of non-native plants like buffelgrass, a dense-growing non-native that is out-competing native plants in many areas of the Sonoran Desert.

Li’s preliminary results show that environmental variation between the dune and sand flat habitat is promoting the coexistence between Sahara mustard and native plants.

Practices like urbanization, road development and cultivating monoculture crops homogenize the environment over the landscape, making it easier for invasive plants to have an advantage over the native plant species.

“Environmental fluctuation promotes coexistence because no species can do equally well under all conditions,” Li said. “Changing environment in time and space provides temporal or spatial niches for different species to reduce direct competition with each other.” 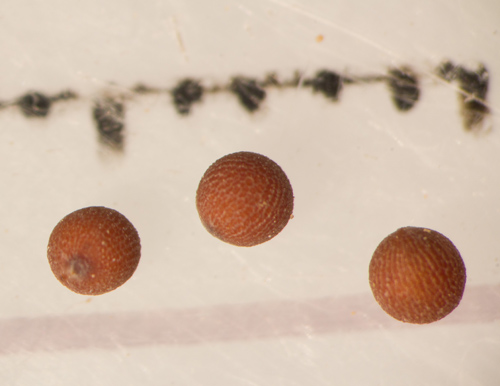 Invasive species that do extremely well usually have significant genetic diversity created by multiple reintroductions of the species by humans, Li noted.

“If humans continue to bring non-native plants to the same destination and let individuals from different original populations mingle and increase their genetic diversity then all of a sudden they have a strong capacity to adapt to local conditions to become a super weed.”

Preventing the introduction of non-native plants to the landscape is likely an easier solution to stop the spread of invasive plants than trying to eradicate an invasion after the weed has become established, Li added.

Meanwhile, understanding the ecological factors that give some plants an advantage over others can help inform environmental policies to curb invasions and give the desert back to the native plants.

“This is the first time in the field that anyone has tried to quantify a mathematically sound coexistence mechanism across multiple scales,” Li said. “Hopefully it will bring some good insight into both science and management.”