Dr. Anwar Zahid has been working in the field of hydrogeology, groundwater model and environmental geology for more than 17 years. Currently he is the Deputy Director of Ground Water Hydrology, Bangladesh Water Development Board and also Deputy Project Director of coastal water resources assessment project of the Bangladesh Government. Dr. Zahid is involved in many research activities in his fields of expertise in collaboration with national and international institutions and universities and 35 of his research papers has been published in reputed journals and books. He is a research fellow of German Academic Exchange Service (DAAD) and International Water Management Institute (IWMI) and visited 18 countries in connection with research and academic activities.

Recently we spoke with Dr. Zahid to discuss issues related to major environmental problems in Bangladesh, how climate change can affect the country’s coastal areas. Moreover, to know if there is any government initiative to cope with the rising sea-level.

Q: What are the major environmental problems in Bangladesh?

Dr. Zahid: Bangladesh is a disaster-prone country and almost every year, the country experiences disasters like tropical cyclones, storm surges, coastal erosion, floods, droughts and saline water encroachment in the coast. Because of its geographic location and low lying topographic condition, Bangladesh is likely to be in extreme vulnerable conditions under the current scenario of changing climatic conditions. Especially the low lying coastal area is at maximum risk. Groundwater is the major source of fresh water across much of the country but there has been very little study on the potential effects of development stresses and climate change on this resource. All components of the system e.g. recharge, discharge, storage and quality can be affected by changes in both climate and population stresses. 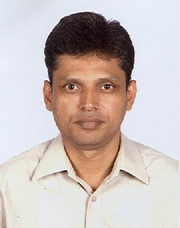 Q. Can you give us any details about current arsenic pollution in groundwater. Is the issue still a serious health hazards for millions of people in Bangladesh. What has achieved till now to control or mitigate the arsenic problem?

Dr. Zahid: In recent years, the presence of arsenic in shallow groundwater of Bangladesh has disturbed the whole scenario of its use. It has been reported that out of 64 districts, groundwater of 61 districts is affected more or less. Since the identification of arsenic contamination in Bangladesh, scientists and several agencies have been engaged to carry out local, regional or national surveys to detect and mitigate the problem. Besides scientific study and investigation, wise management and governance of water resources in the arsenic affected areas has become an important issue in Bangladesh. The contamination of arsenic in Bangladesh groundwater is generally found within 5 to 50m depths, little is found at lower depths. Arsenic contamination is not uniform in all areas and the broad surface geological divisions have a good correlation with the arsenic distribution. The Holocene floodplain and deltaic sediments are severely affected. However, variability of arsenic concentration within short distance makes it difficult to predict the level of concentration of a given well even when the concentration of the adjacent wells are known. Long-term exposure to arsenic in drinking water has the clinical effects of chronic arsenic poisoning and in terms of populations affected and exposed, Bangladesh is under threat of severe arsenic related health problems.

Provision of arsenic safe water for people after screening of wells has been the greatest challenge in Bangladesh. Based on ‘National Policy for Arsenic Mitigation 2004, arsenic mitigation programs for safe water supply have been promoted giving priority to surface water over groundwater source. Technology options are area dependent and no single option can serve the people having diverse socio-economic background. Villages that have more than 80% of the tubewells contaminated are getting priority. Major alternative water supply options provided for drinking use are: dug wells, pond/river sand filters, large scale surface water treatment, deep hand tubewell, very shallow hand tubewells, rainwater harvesting, and arsenic removal technology. However many of these options were unsuccessful because of poor maintenance and unwillingness of their use by affected people.

The policy allows the further development of safe groundwater in the affected areas only if other surface water options are not available. Before imply much stress on deep and safe groundwater, knowledge on resource, aquifer properties and impact of increased stress needs to be investigated. Research and development needs to be extended to improve technologies of safe water supply options, rainwater harvesting method, arsenic removal technology, effectiveness of salinity protections, cheap and affordable piped water supply methods, small scale water treatment plants and to study and investigate deep aquifer. To control and regulate unwise development of water resource, governing tools e.g. policy, plans and legal framework on specific and burning issues as well as overall Groundwater Act needs to be formulated immediately before inviting more problems and uncertainty.

Q. Is the groundwater level in Dhaka declining continuously? Do you see any severe catastrophe happening in the near future like collapsing of buildings or areas locally?

Dr. Zahid: About 2.3 Million Cubic Meter of water is required every day to fulfill the demand of Dhaka city dwellers. To meet this demand of over 14 million people, about 2.0 Million Cubic Meter of groundwater are being withdrawn from the upper Plio-Pleistocene Dupi Tila aquifer. About 563 tubewells belonging to Dhaka Water Supply and Sewerage Authority (DWASA) and more than 2000 private tubewells of varying depths between 100 and 150 meters have been withdrawing groundwater from this aquifer. Groundwater provides about 84% water supply for city dwellers. The uncontrolled abstraction of groundwater has created problems with regard to the management of water resources in the city. The rechargeable areas are being reduced gradually due to unplanned urbanization. Thus, the process of natural water recharge to the aquifer has not kept pace over the last four decades with the rate of water withdrawal from the aquifer, causing decline of the water table. The lowering of the water table over the last 38 years has been from 20 – 40 m in the upper aquifer, with an average decline of more than 1.0 m/year with maximum of 3 m/year in central part of the city. This continuous lowering of the water table has already caused problems with regard to abstraction of water from the upper or first exploited aquifer and requires the exploration of deeper aquifers below 300 meter depths. Surface water pollution is also a significant problem in the city area. Municipal and industrial liquid and solid wastes are the major components in the contamination processes. To reduce the stress on groundwater more alternative options like use of treated surface water and rain water, transport of groundwater from potential areas 25-40 kilometer far from the city area and construction of artificial recharge technologies needs to be introduced immediately.

However, as the aquifer under Dhaka city consists of fine to medium sand, therefore, large scale collapse or subsidence of sediments due to declining water table is not expected. Only local scale problem may take place due to presence of 7 to 45 meter thick overlying clay layer in the surface.

Q. You are an expert on groundwater issue in Bangladesh. What is your current research topic?

Dr. Zahid: Currently I am involved in the project entitled ‘Establishment of Monitoring Network and Model Study to Assess Saline Water Intrusion in Groundwater in the Coastal Area of Bangladesh due to Climate Change‘.The major objective of the project is to establish monitoring network (observation well nests and line wells down to the depth of 350 meter) to detect water quality, groundwater salinity and surface water – groundwater interaction; to identify and characterize coastal aquifers where groundwater is threatening from salt water intrusion; to assess salinity distribution on the groundwater aquifer due to sea level rise; to assess changes (qualitative and quantitative) due to increased withdrawal of groundwater  and climate change.

Q. How climate change is affecting Bangladesh? What about the future of world’s largest mangrove forest ‘Sunderbans’ in case of sea-level rise?

Dr. Zahid: Because of its geographic location and low lying topographic condition, Bangladesh is likely to be in extreme vulnerable condition under the current scenario of changing in climatic condition. Especially the low lying coastal areas are at maximum risk. To face the challenges in adaptation with the climate change impacts to know the real evidences of changes in the events of hydrologic cycle is very important. Agriculture and rural development have been identified as the topmost priority sector for poverty reduction and to meet-up food demand of growing population in Bangladesh. Almost every sector of socio-economic life is likely to be affected by climate change and water sector is the most vulnerable and sensitive amongst them. Groundwater is the main source of irrigation in Bangladesh since decades and one of the key factors making the country almost self sufficient in food production. Increased temperatures are expected to cause increased potential evaporation and less snow, and possible changes in mean rainfall, rainfall intensity, and rainfall seasonality that would affect soil moisture, discharge in rivers, and groundwater recharge. Bangladesh being a very low elevated country, where major portion of coastal land form lies within 2-3 meters above mean sea level, rise in sea level will cause increased encroachment of saline water both in surface water and groundwater regime. And thus will create more stress on fresh water availability for irrigated agriculture and water supply.

The World Bank report (2000) mentioned about the fate of the Sundarbans in connection with the anticipated sea-level rise (SLR). The assumption shows that 10, 25, 45 and 60 cm SLR will inundate 15%, 40%, 75% and 100% of the Sundarbans respectively. 1 metre SLR will destroy the whole Sundarbans. Species like Sundari, main economic species in the Sundarbans, would be replaced by less valuable Goran and Gewa.

Q. Are people in Bangladesh generally concerned about ‘climate change’? Is there any government initiative to make people aware of this issue?

Dr. Zahid: People are aware of climate change as they feel the changes in the environment in practical life. However, this is not possible for the general people to quantify the changes. The Government has already formulated ‘Bangladesh Climate Change Strategic Action Plan’ to face the challenges of anticipated impact of climate change.

Q. Are you planning to write any book on environmental issues in Bangladesh?

Dr. Zahid: Yes, I have plan to write a book on ‘Hydrogeology of Bangladesh/Bengal Basin’. This book will also include case studies on groundwater issues of Bangladesh. I have published about 35 full research papers on hydrogeology, hydrochemistry and environmental science and hope results of these papers will provide big support in preparing the book manuscript.