The planet’s two largest ice sheets have been losing ice faster during the past decade, causing widespread confusion and concern. A new international study provides a firmer read on the state of continental ice sheets and how much they are contributing to sea-level rise.

Dozens of climate scientists have reconciled their measurements of ice sheet changes in Antarctica and Greenland during the past two decades. The results, published Nov. 29 in the journal Science, roughly halve the uncertainty and discard some conflicting observations.

“We are just beginning an observational record for ice,” said co-author Ian Joughin, a glaciologist in the University of Washington’s Applied Physics Laboratory who is lead author on an accompanying review article. “This creates a new long-term data set that will increase in importance as new measurements are made.”

The paper examined three methods that had been used by separate groups and established common places and times, allowing researchers to discard some outlying observations and showing that the results agree to within the uncertainties of the methods.

“It provides a simpler picture,” said co-author Benjamin Smith, a research scientist at the UW’s Applied Physics Laboratory. “In the 1990s, not very much was happening. Sometime around 1999, the ice sheets started losing more mass, and probably have been losing mass more rapidly over time since then.”

The effort, led by Andrew Shepherd at the University of Leeds in the UK, reconciles three existing ways to measure this loss. The first method takes an accounting approach, combining climate models and observations to tally up the ice gain or loss. Two other methods use special satellites to precisely measure the height and gravitational pull of the ice sheets to calculate how much ice is present.

Each method has strengths and weaknesses. Until now scientists using each method released estimates independent from the others. This is the first time they have all compared their methods for the same times and locations.

“It brought everyone together,” Joughin said. “It’s comparing apples to apples.” 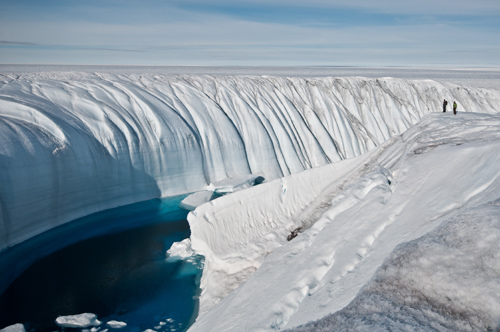 Since 1998, scientists have published at least 29 different estimates of how much ice sheets have contributed to sea-level rise, ranging from 1.9 mm (0.075 inches) a year to 0.2 mm (0.0079 inches) drop per year. The new, combined estimate is that ice sheets have since 1992 contributed on average 0.59 mm (0.023 inches) to sea-level rise per year, with an uncertainty of 0.2 mm per year. Overall sea levels have risen by about 3.3 mm per year during that time period, much of which is due to expansion of warmer ocean waters.

“Establishing more consistent estimates for the contribution from ice sheets should reduce confusion, both among the scientific community and among the public,” Joughin said.

Understanding why the ice sheets have been shedding mass faster in the last decade is an area of intense research. The accelerated ice loss was not predicted by the models, leading the latest Intergovernmental Panel on Climate Change report to place no upper limit on its estimate for future ice-sheet loss.

Joughin is lead author of an accompanying article that reviews factors that cause ice sheets to lose more mass. In particular, it looks at what happens when warmer ocean waters reach the underside of large floating Antarctic ice sheets or abut glaciers in Greenland’s fjords. 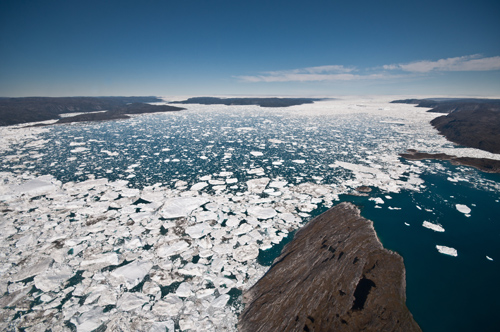 A view down Ilulissat Fjord in Greenland toward the edge of the Jakobshavn Isbrae glacier, which discharges roughly twice as much ice to the ocean as it did in the 1990s. This fjord is frequently clogged with icebergs along its entire 60-km (37 mile) length. Image credit: Ian Joughin, Univ. of Washington

Joughin and his co-authors, Richard Alley of Pennsylvania State University and David Holland of New York University, suggest ways to better monitor and understand those changes: Create finer-grained ocean models that could include narrow fjords, develop more models to study the interaction between ice sheets and ocean water, and improve ice sheet monitoring.

Taking measurements at ice edges is perilous, they write, because skyscraper-sized chunks of ice can topple on floating instruments with no notice, and outgoing glaciers can scour any instruments moored to the ocean floor.

Understanding ice sheets is central to modeling global climate and predicting sea-level rise. Even tiny changes to sea level, when added over an entire ocean, can have substantial effects on storm surges and flooding in coastal and island communities.

The West Antarctic Ice Sheet could trigger abrupt changes globally if it were to become unstable, and although Greenland is thought to be more stable, the recent calving of glaciers has led to some alarm.

Joughin believes the recent activity is a reason to pay attention, but not to panic.

“We don’t fully understand why it’s accelerating,” Joughin said. “But the longer-term observations we have, the more solid predictions we will be able to make.”

The UW portions of the research were funded by the National Science Foundation and the National Aeronautics and Space Administration.