Ying Mao, a doctoral student studying mechanical engineering at the University of Delaware, earned the “Best Student Paper” award at the 2012 IEEE International Conference on Robotics and Automation.

IEEE is the “world’s largest professional association for the advancement of technology.”

The paper, titled “Transition from Mechanical Arm to Human Arm with CAREX: a Cable Driven ARm EXoskeleton (CAREX) for Neural Rehabilitation,” was selected from among nearly 800 papers accepted to the conference.

Mao explained in the paper that rehabilitation robotic devices have been actively explored for training patients with impaired neural functions or in assisting those with weak limbs due to aging or disease. In particular, arm exoskeletons have been used to help patients regain neuromuscular functions in the arm following stroke.

Previous arm exoskeleton designs have used an anthropomorphic mechanical arm attached in parallel to the human arm. By replacing mechanical links and joints with cables, Mao created CAREX, a system that is lighter than conventional exoskeletons, which makes agile arm movement possible, and that does not require joint alignment between the patient and the machine.

“One of the fundamental challenges of cable-driven exoskeletons is to deliver training forces in all directions to the patient while maintaining tension on all of the cables,” Mao said. 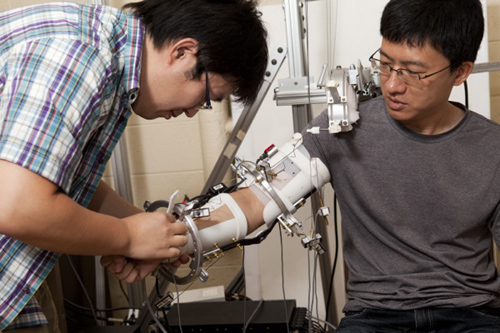 If a cable becomes slack, researchers can lose control of the system. To tackle this problem, Mao “optimized the cable attachment point” — a mechanical change to the exoskeleton that is done before being used on a patient. He then developed a planner to calculate positive cable tensions while maintaining the proper force on the patient during training.

Sunil K. Agrawal, professor of mechanical engineering and a co-author on the paper, serves as Mao’s adviser.

“Cable-driven exoskeletons offer a paradigm shift in the field of functional rehabilitation and we are currently exploring the use of CAREX with researchers at Rusk Rehabilitation Center of NYU,” said Agrawal, who directs the Mechanical Systems Laboratory at UD. Agrawal has devoted more than 10 years to researching and developing new classes of robots, now popularly known as “cable driven robots,” for rehabilitation and manufacturing applications.