A multidisciplinary team of researchers from UCLA and India has found that a new type of intervention program, in which lay women in the rural Indian province of Andra Pradesh were trained as social health activists to assist women who have HIV/AIDS, significantly improved patients’ adherence to antiretroviral therapy and boosted their immune-cell counts and nutrition levels.

The lay women were trained by the research team to serve as accredited social health activists, or ASHA, and their work was overseen by rural nurses and physicians. These ASHA then provided counseling and support to the women with HIV/AIDS, as well as assistance aimed at removing the barriers they face in accessing health care and treatment.

In India, 2.47 million people are affected with HIV/AIDS, and more than half are women. The epidemic is shifting from urban to rural areas, and the rice-producing Andhra Pradesh district in southeastern India is at the epicenter; this area has the highest total number of HIV/AIDS cases of all states in the country, with nearly 20 percent of the population infected. 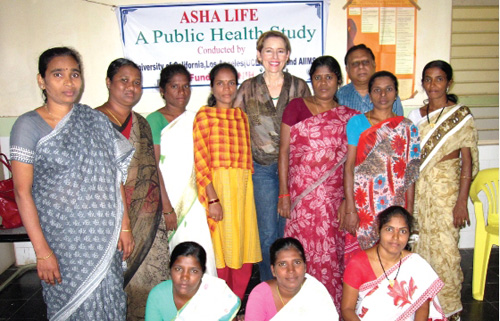 For the intervention study, women with HIV/AIDS in Andra Pradesh were randomly selected to participate either in the intervention, called AHSA-LIFE (AL), or in a control group.

Over a six-month period, the ASHA visited the women in the AL group to monitor the barriers they faced in accessing health care and adhering to their antiretroviral therapy and provided assistance to help mitigate these barriers. The ASHA also provided counseling to help women develop coping strategies to deal with discrimination. The intervention group also received monthly supplies of high-protein foods, such as black gram and pigeon pea.

In addition, the women in the AL group participated in six education sessions covering a variety of topics, including learning about HIV and AIDS, adhering to antiretroviral therapy, overcoming barriers and dealing with the illness. The courses also focused on improving coping, reducing the stigma of the disease, caring for family members and children, the basics of good nutrition and benefits of participating in a life-skills class.

Women in the control group also attended the education sessions, but they did not receive visits and supportive services from the ASHA. They received only standard protein supplementation, not the high-protein supplements of the intervention group.

The pilot study holds promise for rural women and other populations afflicted by HIV/AIDS, Nyamathi said.

“The findings of our study lay the groundwork for a national model related to the benefits of training and working with ASHA in rural India in an effort to improve antiretroviral therapy adherence and reduce stigma and depression, as well as improve nutritional status,” she said.

Other researchers on the ASHA-LIFE project were Catherine Carpenter Ph.D., a faculty member with the UCLA School of Nursing and the UCLA Nutrition Center; Sanjeev Sinha M.D., AIDS director from the All India Institute of Medical Sciences in Delhi; and Kalyan Ganguly, Ph.D., a behavioral scientist from Indian Council for Medical Research in Delhi; and Maria Ekstrand Ph.D., a clinical psychologist from the Center for AIDS Prevention Studies at UC San Francisco.