Innovation Served on a Napkin: How GTRI Moved a Simple Idea From Inspiration to Fabrication

A ground-breaking innovation, birthed in a sudden flash of insight, is the stuff of legend. Air conditioning, Kevlar, the DNA-replicating process known as PCR (polymerase chain reaction) — each was the product of a Eureka! moment. The list may soon be longer by one, thanks to a wandering mind and a napkin.

When Jud Ready attended an academic conference on materials science in Boston in 2003, he didn’t plan on coming home with the idea for a three-dimensional solar cell, but that’s what happened.

Ready, who had virtually no previous background in solar energy, is a principal research engineer in the microelectronics and nanotechnologies group  at the Georgia Tech Research Institute (GTRI.) A native of Chapel Hill, N.C., he harbored a childhood dream of one day becoming an astronaut. He learned how to fly both small planes and helicopters, how to sky dive, and he obtained an amateur radio license, “all with the idea of enhancing my astronaut resume,” he joked. He especially loves flying, and is chairman of the Yellow Jacket Flying Club.  His favorite activity is taking his wife and three children on weekend trips to out-of-town Georgia Tech sports events. “It’s a massive adrenaline rush to be able to take off, navigate through the clouds and land safely,” he said. “Not many people on this Earth can do that.” 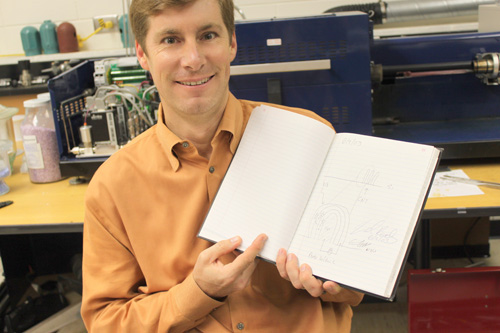 At this particular conference he attended eight years ago, Ready found his attention drifting far away from the speaker and the umpteenth PowerPoint presentation when something — he doesn’t remember exactly what — triggered an idea: What if we make a three-dimensional solar cell rather than just a planar cell? His notebook was in his hotel room, so Ready grabbed the nearest thing he could write on — a napkin — and began to sketch.

Back at Georgia Tech, Ready wrote a paper outlining his theory, which was that periodically spaced micron-scale nanotube structures coated with photoactive material would trap more sunlight than conventional flat solar cells. Visually, the 3-D cell looked something like a micro-scale Manhattan. Not only did Ready’s design offer a larger photon-absorbing surface area than conventional solar cells with the same footprint, the 3-D structure itself captured ricocheting photons that might otherwise reflect off of a flat cell. The structure also ensured that its light-collecting effectiveness actually increased  as the sun approached the horizon.

Ready’s idea generated a great deal of curiosity, but little in terms of additional research investment beyond some initial Air Force support. That is, until then-GTRI director Stephen Cross suggested that John Bacon drop by Ready’s lab, where he might find some interesting projects. Bacon is the founder and chairman of IP2Biz, an Atlanta-based “innovation capitalist” with connections to some 250 research universities around the world. His job is to search for new technologies developed at these institutions on behalf of his corporate clients.

“We might have a client who is looking for, say, an orange octagonal widget, but can’t find any,” explained Bacon, who also serves on the GTRI advisory board. “In all likelihood, someone is working on that somewhere in the world, and our job is to find it. It may be a blue widget instead of orange, it may be pentagonal instead of octagonal, but its development is far enough along that with a little more resources, it could become the product our client is looking for.

“Ninety percent of university research never sees the light of day,” Bacon added. Within that 90 percent are a number of promising ideas, like Jud Ready’s, that aren’t suitable for the conventional venture capital process because they lack what Bacon calls translational research.

“We invest in it, and then after the successful conclusion of that additional work, we sell it to our client and they commercialize it.”

For Ready, IP2Biz’s investment supported his first doctoral student, Jack Flicker. Flicker came to work in Ready’s lab in 2005 from Penn State, where he received degrees in physics and chemistry. He took on the solar cell project to earn his doctorate in materials science in 2011. Along the way, he and Ready produced detailed theoretical models of the light trapping concept that proved the viability of the design and theory, and then built numerous working prototypes.

Bloo Solar of West Sacramento, Calif., recently purchased the commercialization rights. “Their work complements what we’ve been doing,” said CEO Larry Bawden, whose company has been developing a similar architecture for the past two years. “With our expertise and background, we believe we can bring the 3-D solar cell to market faster than anyone else.” The device is expected to be available commercially by 2014.

That’s thrilling news for Ready. The 3-D solar cell is “my first idea that’s been licensed,” he said. “It’s rewarding to the soul that it’s now more than peer-reviewed journal articles, it’s an actual product, or will be soon.”

It’s almost rewarding enough to make him forget about becoming an astronaut. “I’ve still got time,” he laughed. “I’m ready to go — but with no new NASA astronaut selections currently announced, it looks like I’ll have to get a ride with Space-X, Bigelowe, Boeing, XCOR or some other independent contractor or private company.”